Home » How Did Badminton Became an Olympic Sport? (History and Origin)

How Did Badminton Became an Olympic Sport? (History and Origin) 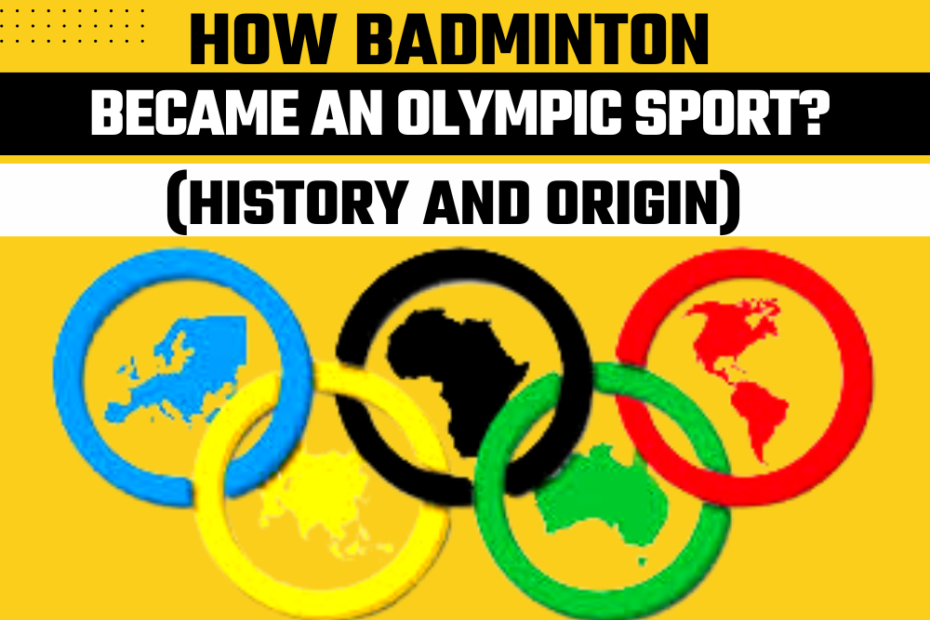 Badminton is a fun sport played by many people worldwide.

This sport was invented long ago and had a great history, as it was known as Poona (named after Pune city), where it first originated.

Later this game was developed by British expatriates in India.

This sport came a long way and also made a debut in Olympics.

China, Indonesia, Malaysia, South Korea, and Denmark are some top-ranked countries that have done well in this sport.

And China is the leading country among these, which has won 47 medals in this sport since it was introduced in Olympics.

But do you know how this sport became an Olympic sport?

Well, I am here to explain it to you:

Years ago, this sport had a completely different look as it was a game of battledore and a shuttlecock and was commonly played by the people of Eurasia (two continents, Europe and Asia, which was called Eurasia).

It was similar to the modern racket sport, where two people hit the shuttlecock, made up of cork and feathers; their main goal was to keep that shuttle in the air and try not to land it on the ground.

A similar game came into existence in the 1800s from India, also called Poona.

This Indian version had a net in between, which divided the court.

Later, British officers took this game to England and introduced it as badminton in front of the world.

In 1887 the Bath Badminton Club was formed and was replaced by the Badminton Association of England in 1893.

And in 1899, BAE started the first competitive tournament, “All England Championships,” for men, women, and mixed doubles.

Later on 5 July 1934, the governing body of this sport, BWF, was formed where England, Wales, Ireland, Canada, Holland, New Zealand, and France were its members.

In 1966 it became a Commonwealth Games sport, and Kingston, Jamaica, was the host city that year.

This sport first appeared and began its journey in Olympics in 1972 as a demonstrating sport.

Later in 1988, it appeared as an exhibition sport in Olympics.

And in 1992, it was declared a medal sport, where only singles and doubles competitions were held.

The world began to learn more about this sport, gaining popularity.

Badminton was included first as a demonstration sport in 1972.

They set two courts in the volleyball hall, where approx

Although it was a small event, 25 players from 15 different nations participated in singles and doubles matches.

The demonstrating games were limited in time, and only men’s and mixed doubles were held, with now women’s doubles included.

The tournament was seen as a huge success, and the crowd was enthusiastic, after which the players started hoping that it would be selected as a legal game for Olympics in 1976, which were going to be held in Canada.

Progress Stalled for Badminton’s Inclusion as an Olympic Sport

Although people’s interest in this sport remained high, its involvement in Olympics stalled because of some sensitive political issues on the official badminton federation front as IBF was challenged by a newly formed body known as WBF (World Badminton Federation).

And it deflects the group’s process towards making this sport an Olympic sport.

After which many reuniting efforts were made by the federation, and finally, in 1981, they signed a deed of unification.

The united group took on the original IBF name and began conducting their world championships.

After that, the president of the International Olympic Committee (IOC), Juan Samaranch, attended the championship held by IBF in 1981 and was amazed by the amazing performance and displays.

And it made him believe that this sport should be added to the Olympic program, and he then encouraged the committee to accept the game as an official sport.

Badminton Recognized as an Olympic Sport

The work of Juan Samaranch was appreciatable, but rather than him, the presidents of IBF, Stellan Mohlin and Craig Reedie, also pushed this sport to be included in Olympics.

Later in 1985, a meeting was held among IOC, and they accepted this sport as an official sport. Also, they preferred to showcase this sport officially in the 1988 Olympics, held in Seoul.

But the Olympic Charter states that there have to be seven years to introduce a new sport, which means that people and players have to be patient until the 1922 Olympic Games, which were going to be held in Barcelona, to be debuted officially.

In 1988, this sport appeared in the Olympics but just as an exhibition sport, and due to it, players could not stay or march in the Olympic opening ceremony and village.

This sport finally made its debut as a medal sport in the 1992 Olympics, which were held in Barcelona.

Four tournaments were held between singles and men, and women doubled in the first competition.

From the beginning, this sport had a rich history, which evolved from the All England Open Championship (the first badminton championship) to the Olympics (a worldwide tournament).

It deserves a place in the Olympics game today and continues to be a part of it and remains popular among the people who love to play some quick-moving sports.

And in case you face any problems or have any questions on your mind regarding this post, then feel free to ask us or pin it up in the comment section below.