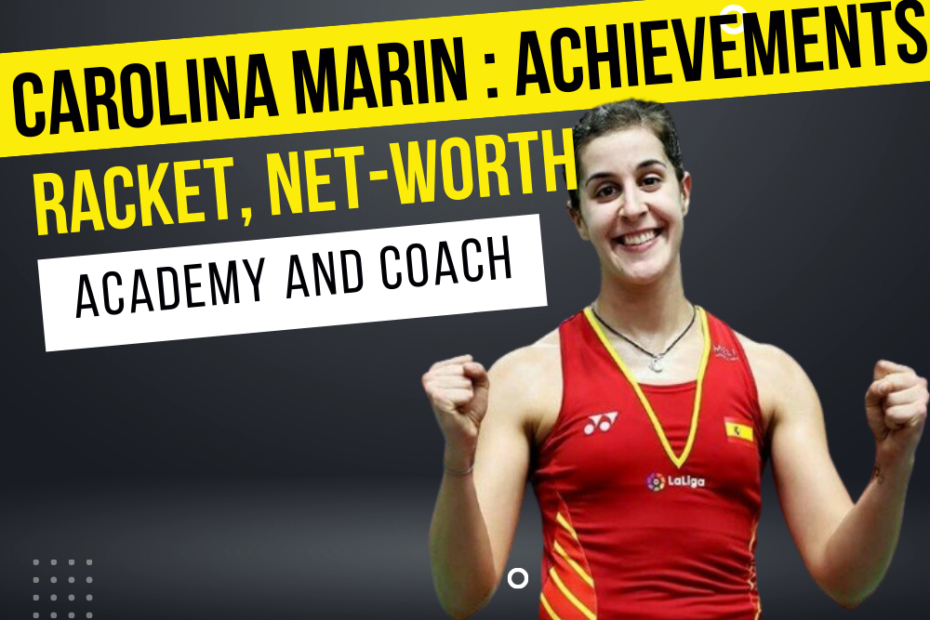 Carolina Marin is known for her loud celebrations and, more importantly, her huge victories and achievements.

She single-handedly ended the long reign of Asian dominance in women’s badminton singles. She set a new standard of speed and fitness for women’s singles and other female badminton players.

Rather than this, she is also an ambassador for the Spanish Football league La Liga and Melia Hotels International for its promotion in other countries.

Carolina Marin is an Olympic Champion, three-time World Champion, six-time European Champion, and the former World’s No. 1 in BWF rankings for the women’s singles discipline, holding the World No. 1 title for 66 weeks.

She is also known as one of the greatest female athletes in women’s singles.

Rather than this, she won many international tournaments, which I have mentioned below:

Also, take a look at this video, where Carolina Marin is seen playing some of her best rallies:

Here’s the list of some top rackets that Carolina Marin used:

As Yonex Nanoflare 700 is a flexible headlight racket.

It holds an extra slim shaft that helps in generating more speed and power while slicing the racket through the air.

And this racket is designed for those players who are looking for easy-to-play and fast shots.

From 2017 to 2020, Carolina used the Yonex Doura Z strike, a very stiff racket with a small head size compared to the other rackets designed by Yonex.

It also holds a smaller sweet spot, which makes it less user-friendly.

But if a player gets used to it, he can efficiently perform some powerful shots and smashes.

During 2016 and before, Carolina was using Yonex Nanoray Z Speed.

Back then, Yonex Nanoray Z Speed was available in two different colour variants- Neon colour and orange colour, and Carolina used both of them.

Rather than Carolina Marin, this racket was also used by Tan Boon Heong while setting the world record (unofficial) smash speed of 493 kmph.

Net- worth of Carolina Marin

The net worth estimates vary because it’s challenging to forecast spending habits over the years.

Rather than this, she is the ambassador for the Spanish Football league La Liga and Melia Hotels International for its promotion in other countries.

And she also earns from the endorsements she signed with some top brands and the prize money.

Where did Carolina Marin take her training?

In her early childhood, Carolina Marin was a keen Flamenco dancer.

But one day, her friend introduced her to this sport, and she fell in love with it, after which she decided to stop dancing and play wholeheartedly.

Marin started playing badminton at the IES La Orden in Huelva at the very early age of eight.

She also stated that she had to leave her parents and hometown at a very young age to take her training at National Center, Madrid.

Marin took her sessions there under the guidance of Fernando Rivas.

Later during the Rio Summer Olympics, she took her physical training in the Sierra Nevada mountain range in Spain (peak height of 3479 m above sea level).

High altitude training is joint among elite endurance athletes and has proven to enhance athletic performance.

And currently, she is training in Madrid’s High-Performance Centre for the upcoming Olympics. Fernando Rivas was training Carolina Marin in the 2016 Rio Olympics, and the French federation has appointed him for the senior role ahead of the 2024 Olympic Games going to be held in Paris.

So Fernando Rivas will remain the coach of three times world champion and split his time between the two positions after signing a part-time contract that runs through the next Olympics.

French badminton president Yohan Panel decided to bring Rivas on board “to add internationally recognized expertise” to its coaching staff already in place.

Rather than this, he also speaks eight different languages.

He played a vital role in making Carolina Marin a World Champ, as he’s a master strategist, and these skills turned Carolina Marin from good to the world’s number 1.