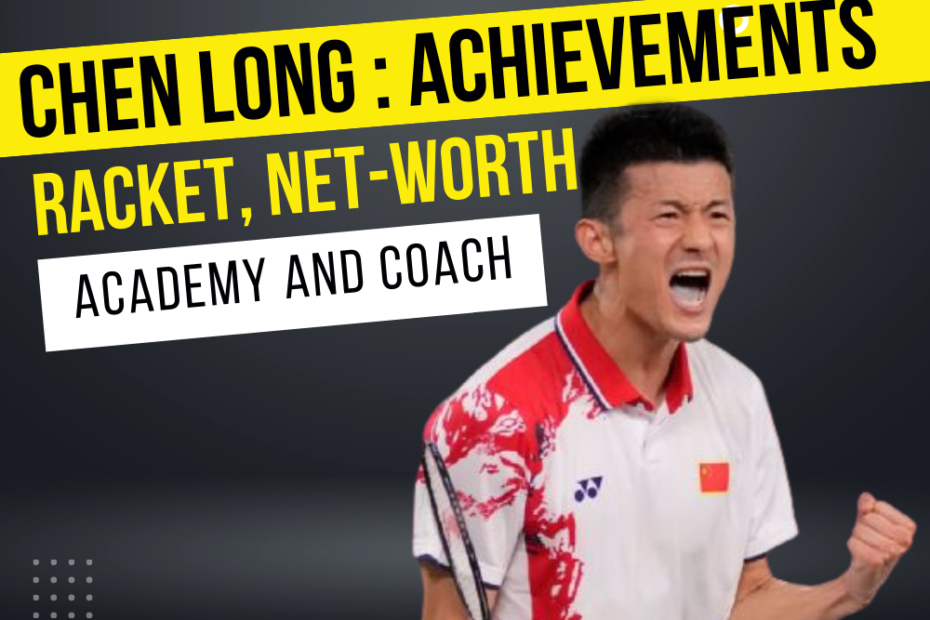 He was the former World No.1 and occupied the top men’s singles ranking for 76 consecutive weeks from December 2014 to June 2016. Chen Long began his international journey in 2007 when he played and won the Asian and World Junior championship.

In 2009 he played and won his first professional tournament at the Philippines Open and won many titles and achievements, which you will get to know in the paragraph below.

Achievements and Victories of Chen Long

And here are some of his top achievements:

Also, take a look at this video, where you can see Chen Long performing some of his best skills and shots:

Chen Long is China’s juvenile player, and here’s the list of some rackets used by him throughout his career:

He performed well using this racket and won many titles.

And talking about the design of this racket, then it holds the same red and yellow colours as that of the Chinese flag.

This 3D calibre series is characterized by a geometric edgy frame design which helps to reduce air resistance while swinging the racket or playing a shot.

Chen Long is currently using Li-Ning AX Force 80, a premium quality racket specially made for players who aim for victory.

And it features a slim, flexible shaft with a head-heavy profile.

It also helps to transfer the racket weight into your shots, making them more effective and powerful.

Net-worth and salary of Chen Long

Chen Long is a Chinese player with a net worth of $10 million.

During their careers, he and another Chinese player, Lin Dan, were crowned the BWF World Champion.

His primary source of income is his profession (being a badminton player) and the endorsements he signed with many top brands like Li-Ning.

Also, the Chinese government pays for their top players’ living costs so they can concentrate on their game and honour their country.

Rather than this, Chen Long’s net worth also comes from the prize money.

Where did Chen Long take his training?

Chen Long is the gold medalist in the men’s singles in the Rio Olympics.

He’s another leader of the Chinese badminton team after Lin Dan.

And do you know how this beautiful young man grew from a child of an ordinary family to a world badminton giant?

Chen Long was born in Jingzhou, Hubei, to Zhang Yuxia and Chen Hua.

His father was a cadre of Jingzhou Education and Sports Bureau, whereas his mother worked in the Rural Commercial Bank of Shacheng District.

Both his parents were basketball players in the Wuhan Military Region before changing jobs, which is why Chen Long inherited the good sports genes.

Chen Long was outstanding; when he was 6 years old, his height reached 1.2 meters.

After watching Chen Long’s abilities, his parents hoped that their son could develop in sports, so they let Chen Long enter the Shashi Sports School to practice badminton.

At a young age, he showed his talent, and after turning seven, he joined a sports school in Jingzhou in 1996.

Later he joined the Xiamen team, and in 2005 he was selected to join the national youth team.

Due to COVID and his injuries, Chen Long was on a five-month vacation.

But currently, he’s taking his sessions at Guoyu’s training base in Shuangliu, Chengdu. Li Yongbo (current coach of Chen Long) is a retired Chinese badminton player and a former head coach of the Chinese national team.

He was one of the best men’s doubles players from the mid-1980s to the early 1990s and was well known for his quickness, reflexes, and power.

Li Yongho took his retirement from his game and started coaching the Chinese players.

And during his 24-year tenure as head coach, Li saw China secure its position as the sport’s most successful country, winning 18 Olympic gold medals and numerous international tournaments.

Achievements and victories of Li Yongbo