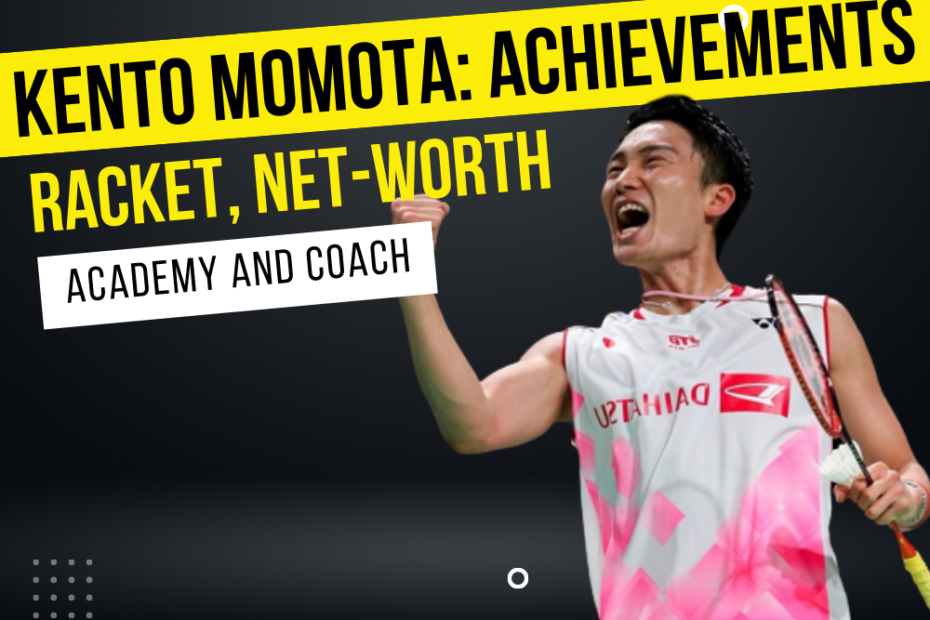 Kento Momota is a Japanese badminton player who belongs to the Mino village of Kagawa district of Japan. Momota is well known for his amazing skills and relentless playing style on the court.

And today, he is ranked as World’s No 1 singles player.

Rather than this, Momota entered the Guinness Book of World Records for “The most badminton men’s singles titles in a season” for his achievements by winning 11 titles in the 2019 season.

Momota’s international journey began in 2011 when he won a bronze medal in boys singles at Asian Junior Championship in Taipei.

In 2012, he won the title of Swedish Masters and Australian Internationals.

Rather than this, he has won several major tournaments, which include:

Also, take a look at this video, where Kento Momota can be seen playing some of his best rallies and shots:

Momota is well known for his solid, balanced gameplay and stylish look.

And here I have mentioned some badminton rackets, which he uses:

2011 and before (Yonex Arcsaber Z Slash)

Rather than this, it moves very fast in the air, which helps in increasing your swing speed.

Yonex Voltric Z Force is the predecessor to Z Force 2.

It is one of the earliest rackets of the very successful Voltric series.

Rather than this, Yonex Voltric Z Force is a heavy-head racket that allows you to play some heavy smashes.

Yonex Voltric Z Force 2 is one of the iconic rackets designed and launched by Yonex, as it was launched before the All England 2014.

This racket holds a head-heavy frame and is best for offensive and attacking singles players.

Also, it needs to improve in playing any defensive shots.

Kento Momota started using this racket during his return from suspension in the Japan National Championships.

Doura Z Strike is a weird racket, but some players love to play with it.

Also, it holds a very small frame and a long and stiff shaft.

88D is a head-heavy racket more suitable for offensive and attacking single gameplay.

This racket is specifically designed for singles, as it holds an orange colour and provides an interesting feel while playing.

Talking about its features, it is a stiff and head-heavy racket, which is more suitable for singles players than doubles players.

Rather than this, it is not fast as Yonex Astrox 88D but still allows you to perform some good smashes and overhead shots.

Currently, Kento Momota is using Yonex Astrox 99 Pro, as it is featured with a new Power-Assist Bumper, which enhances the weight transfer to the shuttle to perform more powerful smashes.

The net worth of Kento Momota is estimated at around $7 million.

His main source of income is from his career as a badminton player, endorsements that he signs with some top brands, and the prize money he wins at the tournaments and championships.

Momota’s successful career has earned him a luxurious lifestyle, a beautiful house, and fancy cars.

Also, he is one of the world’s richest and most influential badminton players.

Where did Kento Momota take his training?

Kento Momota was born in Tokyo, Japan, to Nobuhiro Momota, his father. Still, his mother’s name remained a mystery to the public, while his older sister, Momota Meiko, was his primary caregiver.

From the junior level, he started playing badminton and began his career in this sport at a very young age.

Momota started playing this sport in the second grade of elementary school, after which he won his first title in a fairly prestigious tournament (the All Japan Elementary School Championships).

After completing his elementary school, he continued his studies in Junior High School in Fukushima Prefecture. He won men’s singles championships in his third year but at the junior level.

And after graduating from junior high school, Momota studied at Tomioka High School in Fukushima prefecture to sharpen his skills.

In 2011 Momota joined the Japanese national team and was expected to become a future star.

He faced a lot of defeats during 2011-2012, but somehow he managed to learn from his mistakes.

In 2013, NTT east (Nippon Telegraph and Telephone East Corporation), the largest telecommunications company in Japan, asked Momota to join them, after which Momota officially joined the club that raised its name in April 2013.

Later in 2018, he returned to the Japanese national team.

In 2020 he faced an injury in a car accident, as he sustained the injury, but his driver, Bavan a/l Nageswarau, was killed in the accident at about 4:45 a.m.

After sustaining the injury, he won his first tournament of the season, The Malaysian Masters.

And later, he re-joined the Japanese national team for a training camp after progressing in his recovery from a January car accident. Yousuke Nakanishi is a former Japanese badminton player, who played in the 2007 BWF World Championships in men’s singles, and was defeated in the second round by Sony Dwi Kuncoro of Indonesia, 21-15, 21-16.

It is said that every great athlete is a great coach, and currently, he’s training Kento Momota under his guidance after Momota sustained his injury.

Rather than this, the world’s number one men’s badminton player, Kento Momota, was once trained by Malaysian coach Izuna Ibrahim during his youth.

But the man who helped shape Kento’s career has sadly passed away due to intracranial bleeding.

Later he was buried at the Kampung Banggol Muslim Cemetery.