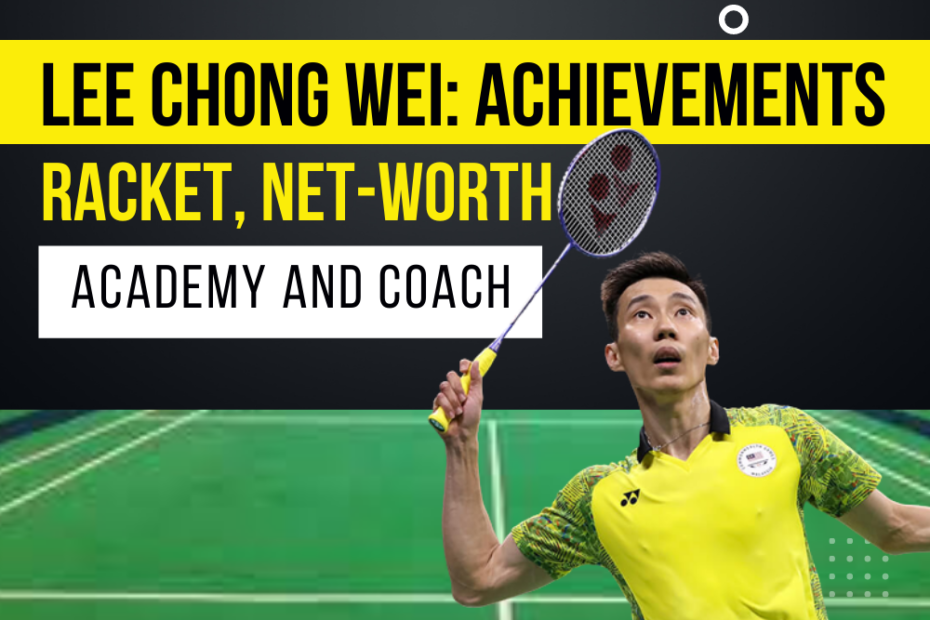 Lee Chong Wei is a former Malaysian badminton player and is one of the all-time outstanding talents. His heroics at the top of the game for many years have earned him the title of “Datuk,” also, the Malaysian president describes him as a national hero.

Lee Chong Wei has won many titles and achievements to date, and his autobiography- “Dare to be a Champion,” is one of the best sellers in Malaysia.

Also, he is the fifth player in Malaysia to achieve such a ranking after Foo Kok Keong, Rashid Sidek, Roslin Hashim, and Wong Choong Hann.

Rather than this, he is the only Malaysian shuttler to hold the number one ranking for more than one year.

Lee Chong Wei is a triple-time silver medalist in the Olympics and the sixth Malaysian player to win a medal in Olympics.

And his achievements made him one of the most successful Malaysian Olympians in History.

Rather than this, he won many titles and international championships, which I have mentioned below:

Also, take a look at this video, where Lee Chong Wei can be seen playing some of his best tricks and powerful shots:

Here is the list of the rackets that were used by Lee Chong Wei:

Lee used Yonex Muscle Power 88 at the very start of his career, as it is one of the best friendly rackets for beginners.

This year, Lee Chong played with the Yonex Nanospeed 9000, a gold, white, and blue edition.

Lee often uses the Yonex badminton series, and one of these series is the Armotec series.

It was one of the most popular series, which Lin Dan and Lee Chong Wei used during the 2008 Olympics.

Lee Chong Wei used Yonex Arcsaber Z Slash during the 2009 Japan Open, which is still one of the best rackets he uses professionally.

He used this racket in the 2011 World Championships finals while playing against Lin Dan, but unfortunately, he lost that match.

Rather than Lee, some other top badminton players like Peter Gade and Mathias Boe also used this popular racket.

The first version was a green/white/ and black edition, while the other was a gold and white edition, which he even used in the 2012 Olympics.

Yonex Voltric Z Force II was one of the exotic and amazing rackets launched by Yonex.

And when it was out, everyone began using it, including Lee Chong Wei.

Lee stated this racket and said it was one of the first high-end rackets I have ever used, and it also features a smaller head than most rackets and the thinnest and stiffest shaft I have ever experienced.

And it made Yonex Doura 10 one of the most popular rackets among the players of all time since Lee started using it.

He used different variants of Yonex Doura 10, from the classic green to the orange edition, to the white and blue versions.

Lee Chong Wei was going to be the leading ambassador for the racket Yonex Astrox 99 after its launch.

But he never got the chance to use this racket because of his nose cancer.

Later on, Yonex made a Lee Chong Wei limited edition Yonex Astrox 99 to honour Lee Chong Wei’s lasting impact on the game of badminton and his legacy.

And on 13 June 2019, Lee Chong Wei finally took his retirement after a fierce battle with nose cancer.

Lee Chong Wei is a popular Malaysian professional player with a net worth of $16 million.

And according to various reports, he has collected US$1.85 million as prize money throughout his career.

Rather than this, he has signed many endorsements with 100 plus isotonic drinks, the Yonex brand, the Kaspersky antivirus program, and other products.

Where did Lee Chong Wei take his training?

At an early age, Lee was more attracted to basketball, but his mother discouraged the activity due to the scorching outdoor heat.

But at the age of 11, his father influenced him to learn and play this sport, after which Lee started training after school under the guidance of a local coach.

Later his talent was discovered by Misbun Sidek, another former leading Malaysian badminton player, and he went to the national academy of the Badminton Association of Malaysia; later, he was drafted into the national squad when he was seventeen years old.

He started playing at seven and was trained by his father at the court in front of their house in Kampung Kanchong Darat, Banting, Selangor.

Misbun was the eldest among the five Sidek brothers, and all his brothers (Razif, Jalani, Rahman, and Rashid) were also trained by his father.

These brothers were once the pride of Malaysia’s badminton from early 1980s to the early 2000.

Misbun won his first international title in 1981 at German Open.

He even helped Malaysia’s national squad to win a silver medal at the SEA games.

And from 1980 to 2000, he won many titles and achievements, which I will mention below.

Later in 2002, he was appointed as the Men’s Singles coach of the National Team of Malaysia and trained Lee Chong Wei under his guidance.

This Malaysian player was ranked 2 in 1983 at the BWF ranking.

Rather than this, he won a bronze in the World Championships, held in 1980 in Jakarta.

He received a silver in 1985 and a bronze medal in the same year at Asian Championships.

Rather than this, he also received three silver and three bronze medals in the Southeast Asian Games.

And finally, in 1990, he retired and started coaching other players, including Lee Chong Wei.