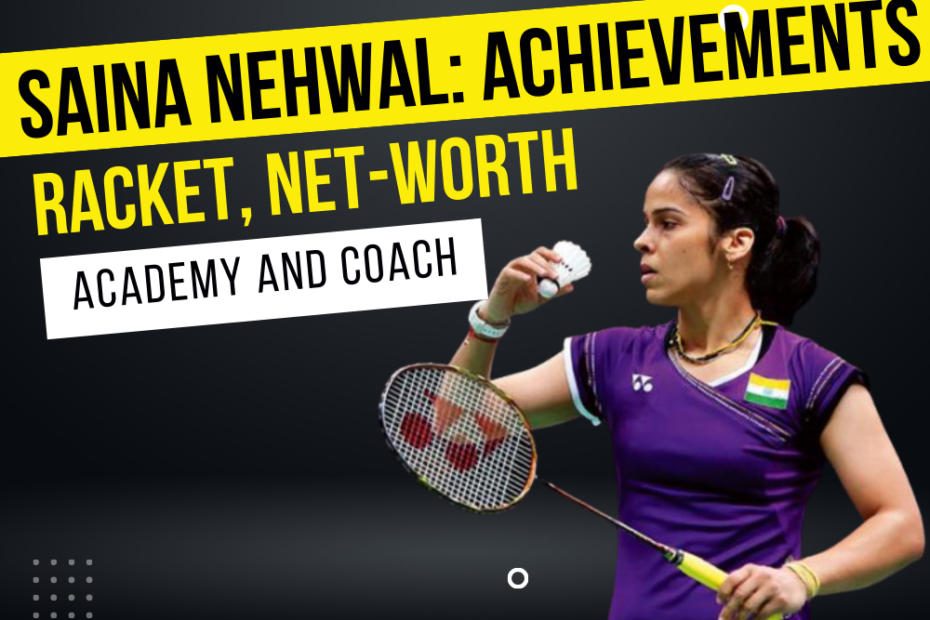 Sania Nehwal is one of the best Indian professionals and most successful players.

Also, she is the first-ever badminton player to clinch an Olympic medal.

She created history by winning Olympic bronze in her second appearance at London Olympics, which were held in 2012. She has won 24 titles, which include 10 super-series titles, and also represented her country, India, in the Olympics almost three times.

Saina Nehwal began her international journey after winning the World junior championship in 2006.

Also, she created history by winning the Asian Satellite Badminton Tournament twice and became the first player to win this feat.

She won a gold medal in singles at the Commonwealth Youth championships.

In 2014, she defeated Wang Yihan and won the Australian super series.

She won a bronze medal at the World badminton championship in 2017, and in 2018 she won two gold medals in singles and mixed doubles at Commonwealth Games.

Also, take a look at this video, where Saina Nehwal can be seen playing some of her best shots and rallies:

Here’s the list of rackets used by Saina Nehwal:

Yonex Nanoray 900 is an even-balanced badminton racket with a stiff shaft and is usually preferred by doubles players.

After 2016 Sania Nehwal switched to Yonex Doura Z Strike, but she used this racket for approx 4 to 5 months.

This Doura Z Strike is a unique racket, providing players with a weird and professional feel.

It could be a more lovely racket for beginners.

Yonex Astrox 77 was the first racket to be launched by the Astrox series.

This racket holds medium flexibility and is not stiff compared to the other high-end professional rackets.

Rather than this, Astrox 77 holds a massive sweet spot.

And not only Saina Nehwal but other female players, including Akane Yamaguchi, Ratchanok Intanon, and Sayaka Takahashi, use this amazing racket.

This Indian professional player, Saina Nehwal, is currently using the Yonex Astrox 99, as she has signed an endorsement with Yonex throughout her career.

Yonex Atrox was launched in 2018 and is more like a hybrid badminton racket between Astrox 88 S and 88 D.

This racket is more suitable for singles than doubles because of its stiffness and heavy head frame.

The overall net worth of Sania Nehwal is estimated to be 5 million USD, which in Indian currency is counted as 36 Crore.

Also, the net worth of Sania Nehwal has seen a hike of 25% in these past few years.

Her Major earnings and income come from endorsements and personal investments.

She is ranked as the 3rd highest-earning badminton player in the world.

About Saina Nehwal’s average salary, her annual income is approximately $ 300,000.

Where did Saina Nehwal take his training?

Saina Nehwal was born in Hisar in 1990 to Usha Rani Nehwal and Harvir Singh Nehwal as their younger daughter.

And at her birth, her grandparents felt disappointed and did not visit baby Saina for many months.

Her parents played this sport for several years as her mother was a Hariyana state player, whereas her father was a university-level player.

During her childhood, Saina accompanied her mother to a local club in Hariyana.

And her father even utilized his provident fund so she could provide Nehwal with good training.

Saina firstly started taking her training under the guidance of Pullela Gopichand in his academy, Gopichand

Badminton Academy, in 2014, but then left Gopichand.

But after a few years, she joined the Prakash Padukone Badminton Academy in Bangalore, where she took her training under the guidance of U. Vimal Kumar.

In 2002, Saina won her first badminton title; it was the U-13 Sub-Junior National title and just after two years, she also won the title of Junior National.

And in 2006, she won the title of runner-up in the Junior World Championships.

In 2018 she got married to Parupalli Kashyap, who is also an Indian professional badminton player. U. Vimal Kumar is an Indian badminton player to win the Indian National title consecutively for two years, 1988 and 1989.

Currently, he serves as the Chief National Coach of India.

Rather than this, he is also the Co-Founder, Director and Chief Coach at Prakash Padukone Badminton Academy.

Later he quit the post in 2006 to concentrate on coaching youngsters at the Prakash Padukone Badminton Academy.

And now he is currently coaching star player Saina Nehwal in Bangalore.

Also, he was awarded the Dronacharya award in 2019.