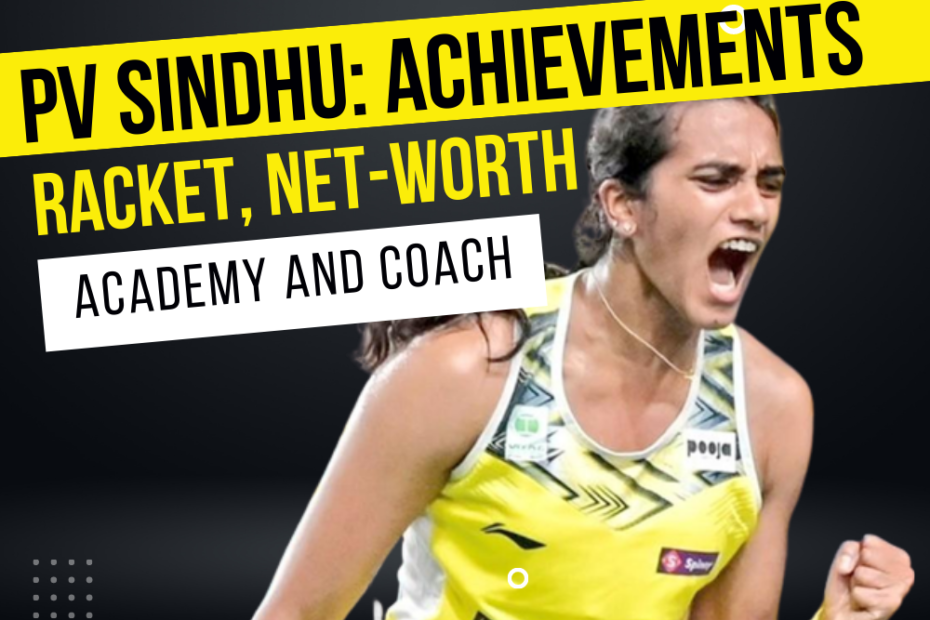 P.V. Sindhu is a Professional Indian badminton player. She is the first Indian woman to win silver in the 2016 Olympics, held in Rio de Janeiro and the youngest Indian player to date with this title.

Sindhu holds a sports background where her father, P.V Ramana himself, was a former professional volleyball player and used to play for the Indian men’s national volleyball team. But apart from it, Sindhu chose badminton and started taking her sessions under the guidance of Pullela Gopichand, a former Indian badminton player.

She started playing badminton at the very young age of eight and decided to make a career in this sport.
Sindhu began her international journey at fourteen by winning the junior Asian championships title in 2009 before clinching bronze with an excellent performance at the 2013 badminton world championships.

Today, with her performance, she has become a national icon.

Sindhu began her international journey at age 14, winning her first bronze medal in the 2009 Sub-Junior Asian Championship, held in Colombo.

In 2010 she participated in Iran Fajr International Badminton Challenge, winning a silver in the singles category.

She reached the quarterfinals of the BWF World Junior Championships in 2010, which were held in Mexico, but unfortunately, she lost to a Chinese player Suo Di in a 3-gamer.

After that, Sindhu participated in many national and international tournaments and won many titles.

Sindhu’s game and hard work today have made her a sporting icon of the 21st century.

Some of her top achievements are mentioned below:

The government of India awarded some national sports awards to PV Sindhu, which include:

Also, take a look at this video, where PV Sindhu can be seen playing some of her best-attacking shots:

P.V Sindhu is India’s juvenile player, and when it comes to a racket, she doesn’t care much about rackets.

But here is the list of some rackets which PV Sindhu uses:

From 2015 to 2018, Sindhu used the Voltric Z Force II, as this racket is best for offensive and aggressive players.

Also, it perfectly suits the style of gameplay PV Sindhu brings to the court.

Voltric Z Force 2 is one of the featured and iconic rackets launched by Yonex before the 2014 All England.

This racket is best for the singles, as it holds a head-heavy frame.

If you are willing to buy this racket, you will need a very good wrist technique to perform any shot.

Rather than Sindhu, a Chinese badminton player (Chen Long) also uses the 900B version of the same racket.

According to Forbes and other research, the net worth of PV Sindhu has estimated approx $7.2 million in 2022.

Talking about the prize money Sindhu earned in her whole career is $200,000.

Also, she has signed an agreement with many brands and companies like Bank of Baroda, Bridgestone, Google, Jhonson and Jhonson, Li-Ning, and Visa.

And Sindhu earns $7 million from her endorsement deals.

She earned a lot from her previous tournament victories and her signed endorsements.

Where did PV Sindhu take her training?

PV Sindhu was born and brought up in Hyderabad, India, to P.V Ramana and P. Vijaya. Her parents were national-level volleyball players, and her father was also awarded Arjuna Award.

Sindhu was educated at Auxilium High School, Hyderabad, and after competing for her schooling, she went to St. Ann’s College for Women, Hyderabad.

Though her parents were volleyball players, she chose badminton over it because she drew inspiration from the success of Pullela Gopichand, 2001 All England Open Champion.

She started learning the basics under Mehboob Ali’s guidance at the Indian Railway Institute of Signal Engineering and telecommunications court in Secundrabad. After mastering the basics, she joined Pullela Gopichand, after which she won many titles.

He joined the Indian National Team in 2019 and began coaching the men’s singles players.

But currently, he is the coach of Indian player P.V Sindhu and helped her to win an Olympic bronze medal in the 2020 Tokyo Olympic Games and a Gold medal in the 2022 Commonwealth Games at Birmingham.

Informing you about Sindhu’s early coaches:

Sindhu got her first sessions from late coach Mahboob Ali at an Academy in Secunderabad; he even trained Saina Nehwal and Jwala Gutta.

With her basics clear, she took her training under the guidance of Pullela Gopichand and started her sessions at the Gachibowli Stadium.

Sindhu took more interest in this sport after Gopichand’s win at the All England Open Championships in 2001.

After that, Sindhu and her father would travel more than 50 km from their house in Marredpally every day to take her sessions.

Under Gopichand’s guidance, Sindhu won a silver medal in the 2016 Rio Olympics and more silver at the world championships, Commonwealth Games and Asian Games.

After a few months of training with Kim Ji Hyun, Sindhu participated in BWF World Championships 2019 and won the title, after which she became the first Indian to do so.

Sindhu later decided to leave the Pullela Gopichand Academy and started training with her current coach – Park Tae Sang, at the Gachibowli Stadium in Hyderabad.