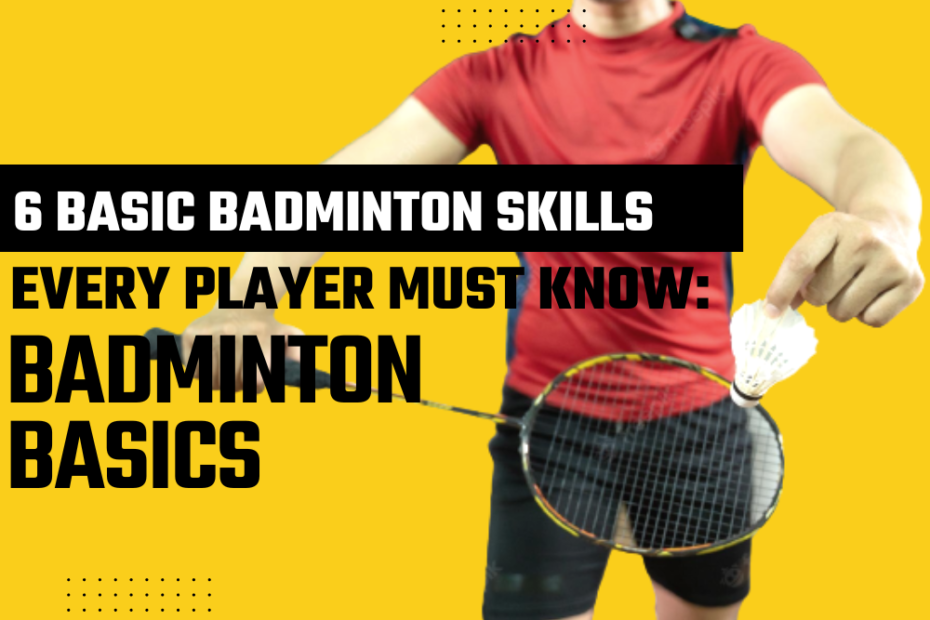 You must know the basic skills, whether a beginner or an advanced badminton player.

And you must learn these skills in the starting days of joining the academy. Otherwise, they will haunt you in the future.

It haunted me because I did not learn the basics at the start and struggled a lot in the beginning days of joining the academy.

I could not even easily kill a shuttle just over the net and was unable to indulge power in the smashes.

My smashes were like drops because I did not even know how to hold a racket properly.

I am writing this article because I do not want anyone else to go through this phase I once faced.

It is like living the worst dream for every beginner.

6 Basic Skills Every Player Must Know

Before entering the court, warming up your body is essential to avoid injuries.

To soften your muscles before playing, you must start with some leg, wrist, neck and shoulder exercises.

Just watch this video by Badminton Insight and learn in properly:

If you do not hold the racket correctly, you can face injuries like tennis elbow, wrist pain and shoulder pain.

So it is necessary to know the proper gripping technique to avoid these problems.

Do you think you will start playing and automatically learn to hold the racket? Do not do this mistake. I will never suggest you this because I did the same.

When I joined the badminton academy, I thought I would learn to hold the racket myself rather than learn from a coach or online.

Trust me, friend, It was the worst decision of my life. For like 6 months, I was holding the racket in a panhandle grip, and I was suffering from tennis elbow, wrist pain, and sometimes shoulder pain.

So, it would be best if you will not face what I faced.

I will tell you how to hold a racket properly and do not worry if it looks uncomfortable at the start.  Eventually, you will get used to it after some time.

All you need to do is trust me and learn the best gripping technique.

There 4 main types of grips you will mostly use:

The forehand grip is the most used grip to play different shots.

It is used for forehand clear, smash or slice, drop, drive, lift, serve, and net shot.

It is very similar to shaking hands with your friend.

Warning: Please do not hold the racket too tight. It will restrict you from changing the grip to another grip easily.

As shown in the image, there should be a small space between your index finger and middle finger. It is the second most used grip.

It is the same as holding a frying pan in the kitchen.

Remember: The player’s thumb should be placed on the wider section of the racket handle, and racket strings should be facing upwards.

This grip is used for backhand serve, backhand drive, and doubles defense. This grip is mostly used for backhand clear and singles defense.

It allows you to rotate your backhand fully to generate more power while hitting a backhand. This grip is mostly used in doubles when the player is in front of the court.

It’s easy to net-kill a shuttle with a panhandle grip with the help of wrist and finger power. You can increase your hand-eye coordination, power, and control in the shuttlecock.

There are 3 types of stances:

If you are right-handed, your left leg should be ahead of your right leg, and your racket should be in a bevelled grip.

Your right foot should go forward while receiving a shuttlecock, and a bevelled grip will help you switch grips easily.

Check the images to understand them properly: This stance helps you rotate the body properly and generate more power. This stance helps you see the shuttle carefully and return it easily.

You can miss many smashes if you do not use this stance properly.

In this stance, your legs should parallel each other with a little bend, and your racket should be ahead of your body.

Check the below image to understand it properly. Doesn’t matter how good you play if you cannot perform a good serve.

The game starts with a service, so you must be good at it.

Professional players never want to give a point while making a service. That’s why they practice it thousands of times.

Then, a player performs the service from his court to the opponent’s cross-court.

There is some rules player has to follow while performing a service.

There are 4 different types of services you can perform while playing.

In this service, the player tries to give the minimum height to shuttle from the net and wants it to land near the opponent’s service line.

Keeping the lowest height possible from the net is a must for this service otherwise, your opponent can easily tap the shuttle, and you or your partner may find yourself in a difficult position to return it correctly.

There is always a chance to give an attacking position to your opponent by performing this service.

That’s why male singles players rarely use it.

In this service, the player hits the shuttle upwards and wants it to land near the rear-end court.

This type of service is used to surprise your opponent.

While performing 4-5 low serve continuously, the player’s opponent may be ready to step forward and tap the shuttle, and that’s where a good player performs a flick serve.

In this service, the player hits the shuttle to the rare court of the opponent in singles and the end court of serve in doubles.

BWF (Badminton World Federation) gives many rules or limitations to this type of service, and please read them carefully before performing it in your game.

This type of serve is advanced serve which Lin Dan mostly uses.

This service is performed with forehand technique, but instead of hitting upward, a player hits the shuttle flattered to their opponents.

This service could give you an easy point, but there are many rules & regulations for this service also.

We recommend you read them before performing this service in your game; otherwise, you might lose a point.

Watch the below video to understand all the serves correctly:

Clear is the most basic badminton shot played by a player.

Doesn’t matter, you are a beginner or an advanced player.

The first shot anyone plays while knocking is the forehand clear.

In this shot, the player hits the shuttle to the rare court of the opponent.

So that opponent can have difficulty returning the shuttle from the rare end court.

There are 2 ways to play this shot.

In this shot, the player hits the shuttle using a forehand grip on the rare court of the opponent.

Watch the video below to understand it properly:

In this shot, the player hits the shuttle using a backhand or bevel grip to the rare end court of the opponent.

You can easily understand it by watching the video below:

In this shot, the player hits the shuttle slowly to land it just over the net.

This shot gives a chance to be in an attacking position, and if the opponent returns to the shuttle haft court, there will be a good chance to hit a powerful smash and win the point.

There are 2 ways to play this shot.

In this shot, the player slowly hits the shuttle using a forehand grip to land it just over the net.

As you can see in the below video:

This type of drop is difficult to master. In this type of shot, the player uses the backhand grip and hits the slowly enough to land it just near the net.

Watch the below video to master this shot:

Smash is the most effective shot you can play to win a point.

In this shot, the player hits the shot with full power to the opponent’s badminton court, and because of its speed opponent finds it difficult to return this shot.

The fastest shot recorded until today is 426 km/hr.

This shot also can be played in 2 ways:

In this smash, the player hits the shuttle at full speed using the forehand grip.

A player mostly uses this type of smash.

You can watch the below video to understand it properly:

This type of smash is hard to master, but you can win many points if you learn it.

In this shot, the player hits the smash with full power using the backhand grip on the opponent’s court.

Watch the video given below to understand it properly.

Learning basic skills is an essential part of every game.

If you have been to the academy, you should know how to perform these skills with amazing technique. Otherwise, you can hurt yourself.

A good technique is key to avoiding injuries that come your way.

And in case you face any problems or are there any questions going on in your mind, then feel free to ask us or pin them up in the comment section below.