Home » 4 Types of Badminton Stances Every Player Must Know

4 Types of Badminton Stances Every Player Must Know 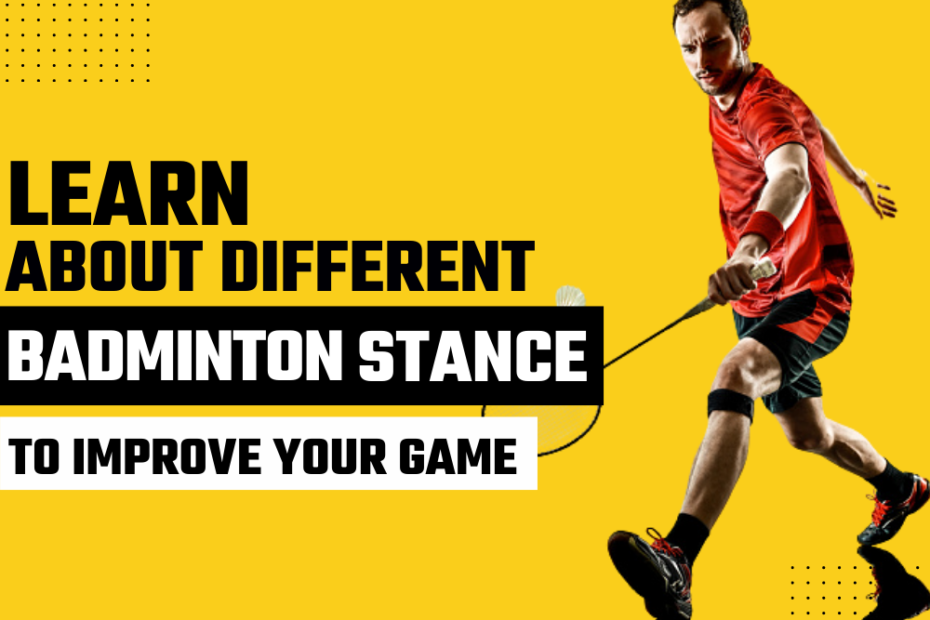 Badminton is one of the fastest sports in the world.

It is all about performing some fast moves with the proper stance.

These stances can be defensive or offensive.

Such stances are usually performed while you are retrieving shots from your opponent.

According to rules and regulations, these stance remains similar for singles and doubles.

But it’s easier to see these stances clearly while playing singles.

You can easily play some exquisite shots and win a rally if these stances are well performed.

And in case you are a beginner, then you must learn these stances under the supervision of a professional player or a coach.

Remember: These stances decide your overall game and performance.

So let’s discuss these stances:

Before mastering any specific shot, firstly, you need to master these stances.

If you are new to this sport, check our post: A Complete Badminton Beginner’s Guide.

There are four different types of stances that the players perform during the match:

This stance is usually used when trying to play an overhear forehand shot.

If you want to play this shot, wait for your opponent to play for a defensive block and net shot.

Also, if you want to force your opponent to move to their rare court.

It allows you to perform some fast and quick forward movements.

And also helps to limit your opponent’s options.

When to use a forward attacking stance?

This stance is used when your opponent performs a lift or clear.

Then you need to move to the shuttle and try to hit it.

How to perform a forward attacking stance?

A backhand attacking stance can be advantageous for excellent power and speed players.

A player can use this stance while performing a lift or an attacking shot.

It is commonly used in the backhand front court as an alternative to a forward-attacking stance.

You can easily send your opponent to their rare court after playing a powerful shot with the help of this stance.

It even helps you to perform some fast and quick backward movements.

The backward attacking stance is slightly similar to receive and serve stance.

Not all badminton players can perform effective shots using this stance.

So you need to practice this stance if you want to exploit your strength.

When to use a backward attacking stance?

This stance is used similarly to per forward attacking stance.

It is performed when your opponent performs a high lift or clear.

Then move to the shuttlecock and try to hit it.

How to perform a backward attacking stance?

A defensive stance is one of the easiest stances to learn and perform by a player compared to the others.

Players choose this stance when they think their opponent will perform a hard move.

It merely helps you perform some easy sideways movement on the court and return your opponent’s smashes very effectively.

It is a comfortable stance that every player should master, whether a beginner or a professional.

When to use a defensive stance?

When willing to perform a high clear or high serve, you can use a defensive stance.

And this stance helps you to recover your base position before your opponent returns the shot.

How to perform a defensive stance?

Receive and serving stance is quite similar to the backward attacking stance.

However, in this stance, you get sufficient time to wait and be prepared for the next moves.

Remember: While serving, your feet should remain on the badminton court.

Or else it will be counted as a fault.

When to use receiving and serving stance?

This stance is performed when you start the rally or return your opponent’s serving shot.

How to perform a receive and serving stance?

Face towards the front court.

Hold the racket above your waistline.

Slightly bring your body weight forward on your racket leg.

Hold the shuttle with your other hand while serving and hit the shuttle from below the waistline.

But if you are receiving the shuttle, raise your non-racket arm to maintain body balance.

Then hit the shuttle as it enters your court.

If you are new to this sport or are a beginner, I hope this post about different stances can help you enhance your game and become a good badminton player.

Players use these stances according to their situation on the court.

It also helps them to dominate their opponent and win more rallies.

Also, here I have indulged some videos in the article so that you can easily clear your doubts.

And in case you still have any queries or questions going on in your mind regarding this post, then feel free to ask us or pin up your questions in the comment section below.