Home » Why Badminton is the Fastest Sport in the World?

Why Badminton is the Fastest Sport in the World? 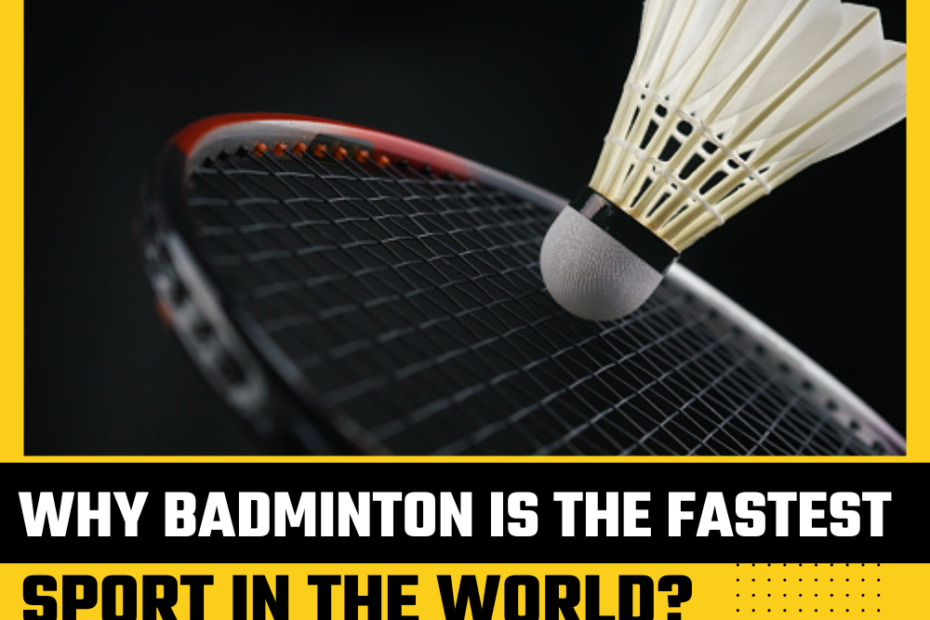 Do you know which is the fastest sport in the world?

The answer might be pretty shocking, which is badminton, because if we compare the other fastest moving objects in sports, then the response we get is a shuttlecock.

And do you know how fast a shuttle can travel?

I bet you will be shocked after knowing its speed.

As professionals, the average speed of a birdie is over 200 mph, making badminton the fastest sport out there.

Although, there are many reasons behind this sport being considered the fastest in the world.

So let’s find out some of these reasons:

Why is badminton the fastest Racket Sport in the world? Badminton is the fastest racket sport in the world because it has the fastest recorded speed for a service, and the nature of this sport is very dynamic and explosive.

And according to these sports statistics, a single match holds an average of 1.72 hits per second; therefore, the players only have a fraction of a second to hit the shuttle or perform a serve.

We can also say that badminton is the fastest sport because of the fast-paced and explosive rallies, as it is pretty rare for rallies to go over a minute long, and when they do, they are pretty spectacular.

Easy matches and tournaments take an hour to finish and approx eighty minutes if it’s a professional match or a bit tougher.

However, for a large part, this sport owes its speed to the shuttlecock, as these shuttlecocks are made up of 16 goose and duck feathers which holds a cork base.

A shuttlecock weighs approximately 5 grams and holds an aerodynamic shape, which helps it move faster than the other sports ball.

What is the fastest speed of a shuttle recorded to date?

According to the BWF and Guinness book of world record, a player from Malaysia, Tan Boon Heong, played a smash during a speed trial match in Japan in 2013, where he was testing his new racket’s technology, and the speed of his smash was recorded as 306.3 mph (493 km/h).

Rather than this, the Guinness world record states that the fastest hit in doubles was performed by a Demark player, Mads Pieler Kolding, during a premier league match, which was held in Bangalore, India, in 2017, and it was recorded as 264.7 mph (426 km/h).

On the other hand, a female player from Thailand, Ratchanok Intanon, set the highest record by playing a smash, where the shuttle speed was 231.15 mph (372 km/h).

How fast can a badminton shuttle go?

Anyhow the exact speed of a shuttle depends on its type and design, as it is manufactured in various speed units.

Rather than this, the player’s gameplay and climate also decide the shuttle’s speed.

While the international speed metric for shuttlecocks looks like this:

Though there are no such official data available that can decide how fast a shuttle usually goes, there are some unofficial estimations for intermediate and professional level players that I have mentioned below:

If we talk about high-level players, their smashing speed remains approximately 155.3 mph (250 km/h).

But some experts state that the average speed of a shuttle by professionals players is approximately 201 mph (323.5 km/h).

How is the fastest shot in badminton compared to the other sports?

So let’s check it out:

Tennis is well-known as a high-speed sport, and many people consider it the fastest sport in the world.

But it isn’t so because the speed of tennis doesn’t even come near badminton’s top speed.

During an ATP Challenger event in Busan, South Korea, Samuel Groth, a tennis player (Samuel Groth) from Australia, performed the fastest tennis serve of all time at 163. 4 mph (263 km/h).

But such challenger competitions are not always equipped with radars to measure the serve speed, so the Association of Tennis Professionals (ATP) does not officially acknowledge this speed record.

And as compared to badminton, then a USA player, John Isner, achieved the incredible serve speed record of 157.21 mph (253 km/h) in the male category.

Table tennis is a dynamic sport in itself, but still, it is not faster than badminton.

A tennis ball goes 60 to 70 mph, as it is pretty light and there’s air resistance.

Table tennis has more hits per second in the rallies, averaging 2.00 due to the player’s proximity.

Jai-Alai is appraised as one of the deadliest ball sports in the world.

It is believed that it is also one of the fastest ball sports in the world.

The ball, called Pelota, makes this sport lethal as it is smaller than a baseball and slightly more complex than a golf ball.

And according to the Guinness Book of World Records, the fastest speed of the ball in Jai-Alai was 188 mph (302 km/h).

Though Pelota holds a great speed, it can still not be compared to the shuttlecock’s speed.

Baseball’s fastest pitch to date was played by Nolan Ryan and was recorded as 108 mph (174 km/h).

But it is not fast enough to compare with badminton.

Hence it has been proved that badminton is the fastest sport in the world.

And in case you face any problems or have any questions in your mind regarding this post, feel free to ask us in the comment section below.