Types of Serves in Badminton (Low, High, Flick, and Drive) 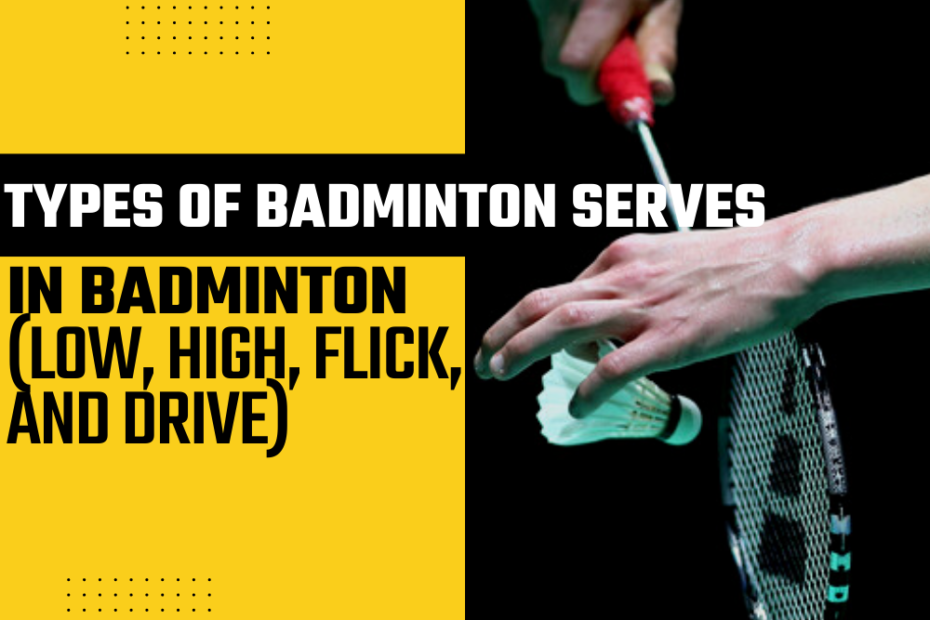 There’s no doubt that badminton is one of the fastest sports in the world.

A player needs to stay in his attacking mode from the beginning of the game.

And for this, you must be very careful while serving in the game.

Try not to give away free points, and easily smashes your opponent.

And to prevent such mistakes, precision and placement are the keys to performing a perfect serve.

It is because when you serve in the game, you get total control over it.

So take advantage of it and learn how to play badminton and these serves:

Types of serves in badminton

There are usually four kinds of service performed on the court:

Low serves are usually performed by a player when he wants to land the shuttle in his opponent’s frontcourt or just inside the short service line.

While performing this service, a player tries to keep the shuttle as low as possible so that his receiver would not be able to hit a smash.

Low serve is like hitting a soft stroke to hit the shuttlecock so that it starts losing speed just after crossing the net.

These low serve in singles are frequently played against those players who are active to perform some strong smashes.

Whereas in doubles, it is considered a default serve as it limits your opponent’s options while performing an attacking shot.

Steps to perform a low serve?

A player performs a high service to place the shuttle in his opponent’s backcourt with a steeper angle.

While performing this service, you have to swing the racket so that you can lift the shuttle high enough and could reach the opponent’s backcourt.

It also prevents an easy smash from your opponent.

Instead, your opponent can return your serve with a lob, clear, or drop.

Remember: The main objective behind landing the shuttle in your opponent’s backcourt area is that it will force him to use his backhand.

Many players, including professionals and world-class badminton players, have weaker backhand grip than forehand grip.

Steps to perform a high serve

It is an aggressive backhand serve, which seems similar to the low serve.

This service is usually performed to trick and mislead your opponent to expect a low serve due to your low serving stance.

But you need to push your thumb and flick your wrist harder to let the shuttlecock fly higher and head towards your opponent’s backcourt.

Also, remember this service is slightly hard to master.

So it would help if you practised it until you didn’t make any mistakes.

Steps to perform a flick serve

Drive serve is also a kind of trick shot, which is usually performed to surprise the receiver.

Here the body positioning and the stance of a player seem similar to the low or flick serve.

The old difference is the angle of the racket face targeting the trajectory.

To perform this service, you need a fast wrist action by squeezing the racket grip with the help of your fingers and thumb just before striking.

Drive serve is best for singles and doubles, adding variety to your surprise elements.

Steps to perform a drive serve

A badminton game always begins with a serve.

And this one serve decides the next move of your opponent.

To learn these different types of serves and don’t be predictable.

Also, use your serves strategically to end up with good results.

And in case you faced any problems or are there any questions going on in your mind regarding this post, then feel free to ask us or pin them up in the comment section below.