Different Types Of Smashes In Badminton 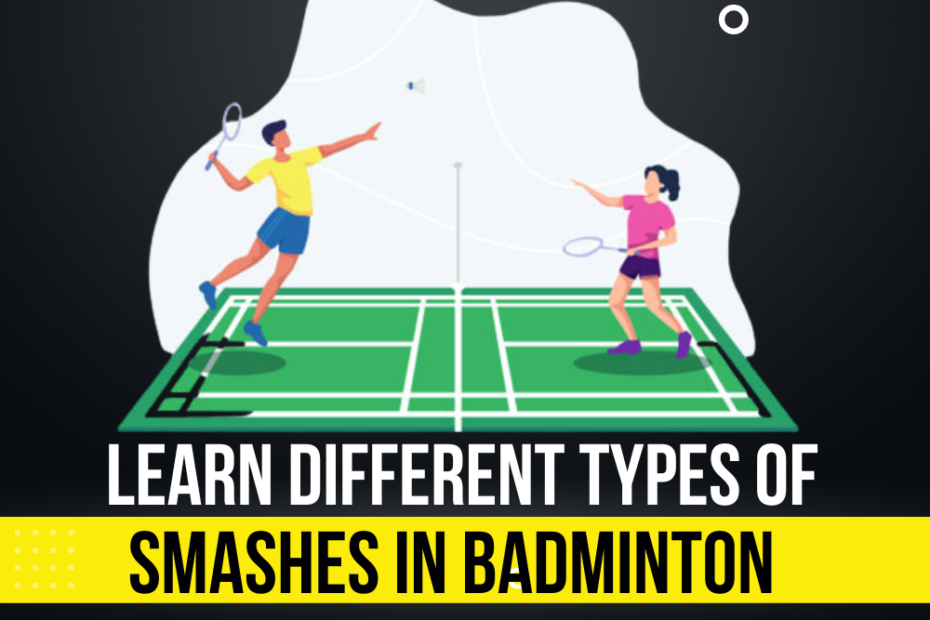 Badminton is all about speed and performing different shots on the court.

As it looks like an easy and few-smashes game.

But knowing how many types of smash shots you can play will amaze you.

You must play one at least a thousand times to perfect it and find a smash that you can play better than anyone, and I bet it will help you win most of the rallies.

If you master different types of smash shots, no one can stop you from handling any situation while facing your opponent and winning the game.

So I’m going to explain to you some of the most played smashes, which can help you enhance your game and skills.

But before going further with the post, let me define to you what an smash shot is:

Smash is one of the best offensive and fastest badminton shots, usually performed when the shuttle lands in the middle of the court.

It is played downwards and straight with total energy and power.

The main aim of performing this attacking shot is to:

Now let me explain to you some different types of smashes that you can play with using your forehand and backhand grip.

Full smash is a commonly played smash, also known as the heavy smash or power smash.

In these many years of my badminton journey, I have seen many players performing this smash as an end shot, that is, to end the rally with a powerful hit.

But rather than playing it as a finished shot, you can also perform this smash shot to create a chance for a net kill.

It helps you to make the opponent out of balance, force your opponent to the backside of the court, and change the pace of the rally out of a sudden to surprise the opponent.

And to perform this smash, one needs to indulge a lot of power in it, which makes it difficult for your opponent to counter this shot and take the attack back, as it is so quick and powerful.

Every shot has pros and cons; similarly, full smash also has disadvantages.

To perform this smash, a player indulges his lot of power and energy into it, making it difficult for the player’s body to recover and return to his base position.

Full smash is often performed in doubles as here you have the partner support that helps you cover the court’s front area.

Also, this smash is performed in two ways: You can perform it while standing on the court (normal smash) or with a jump (jump smash).

Remember: If you are performing this smash while standing on the court, then the power indulged in the smash will be less, but you will have more control and more chances to recover quickly.

If you are performing this smash with a jump, then it will provide more power and momentum to your shot, and it will be hard for your opponent to respond to your jump smash.

And if you perform a full smash correctly, you can quickly end the rally and score a point.

In case you want to know more about full smash and learn how to execute it in the right way, then check out the video given below:

Half smash is another commonly played shot, which is played at random points in the game.

It helps you to confuse your opponent and make it difficult for them to adjust the pace of the rally.

Also, you can perform this shot to pressurise your opponent and take the attack to the player.

And as per its name, this smash is generally performed with half of your strength.

The best thing about half smash is that you can indulge your limited amount of power and energy into it to perform this shot.

And it won’t let you throw your bodyweight out of balance.

Also, it will make it easier for you to recover fast to respond to the next shot.

Performing half smashes during the match can help you to win more points, especially when your opponent is out of his base position.

Half smash can be more effective when you are playing singles, as in singles, you get a lot more space to place the shuttlecock.

Remember: While performing this shot, try to maintain your balance and return to the base position quickly to be ready for the next shot.

Also, if you want to learn how to improve your balance for badminton, then click here.

A player generally performs a stick smash to surprise his opponent.

To perform this incredible shot, a player must hold a badminton racket adequately, rotate his forearm and tighten his forehand grip to generate more power.

You can also perform this smash with your fully stretched arm.

A stick smash is not decisive as a full smash, but it is also not soft as a drop shot.

The difference between stick smash and full smash is that we don’t complete the follow-through with the stick smash.

When you hit the shuttle, you need to whip the racket back into the air where the racket came from.

Rather than this, the stick smash is quite hard to master compared to the half smash and full smash.

But if you want to learn how to execute this shot adequately, then check out the video given below:

Slice smash is performed by slicing or hitting the shuttle at a certain angle so that it will change its trajectory and land at a different place than the opponent count on.

As hitting the shuttle at an angle will reduce the speed of the smash,

So I suggest you aim a slice smash at the corners of your opponent’s court at a sharp angle.

This shot is generally considered a fast-cross-court-drop.

And if you perform this smash correctly, it will help you confuse your opponent and throw them out of balance.

Rather than this, it can be a very deceptive shot when you don’t overuse it.

Smash is one of the best offensive and fastest badminton shots and is usually performed when the shuttle lands in the middle of the court.

And by learning the different types of smashes, you can easily limit your opponent’s shots and score more.

If you want to learn these smashes and improve your game, you must practice as these are challenging to master.

To help you with it, I have also mentioned some videos that will let you know more about these smashes.

And if you face any problem or any question in your mind regarding this post, then feel accessible to pin it up in the comment section below.