Different Types Of Shuttlecocks In Badminton 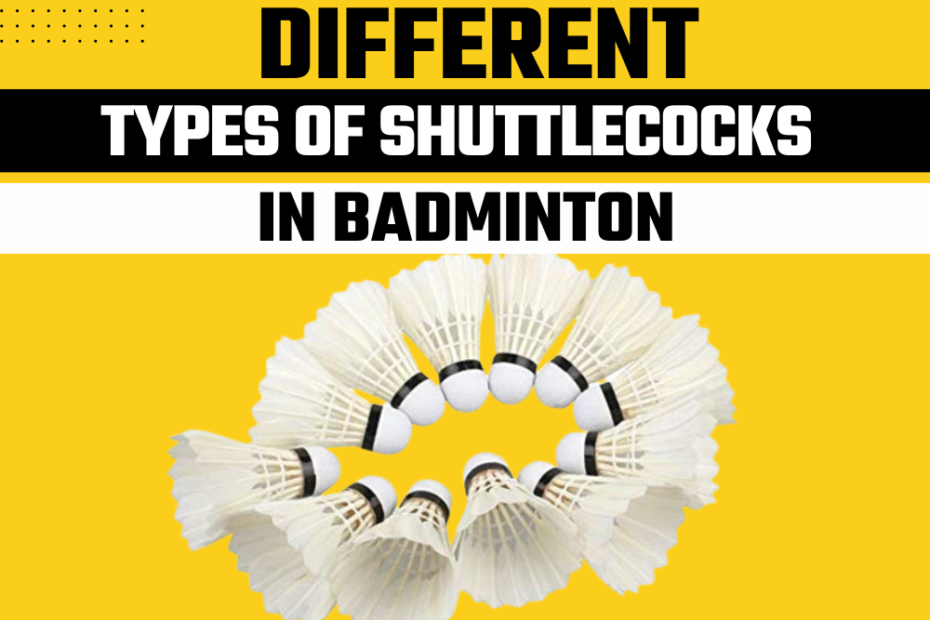 Badminton is a racket sport and the second most popular sport in the world.

This sport is usually played using a racket, a shuttlecock, and a net.

The racket used in this sport is much lighter than a tennis racket.

And a shuttlecock, also known as a birdie, is used here in place of a tennis ball.

The players use this projectile to hit back and forth with the help of a racket over the net.

It holds a conical shape with feathers embedded into a cork base as the cork base provides weight to the shuttle so that it be played back and forth for longer rallies.

However, the shuttlecock is either made up of synthetic materials or feathers.

Synthetic materials include nylon and plastic.

But do you know how many types of shuttlecocks are used in this sport?

If yes, then fine, but if no, then let me explain it to you and which shuttlecock you should use according to your game level:

Types of shuttlecocks in badminton

There are generally three types of shuttlecocks used by the players:

Now let me define these shuttlecocks: Feather shuttlecocks are usually made up of goose and duck feathers.

The feathers are usually taken from the duck and goose’s left wing because of aerodynamics, as the left-wing spins clockwise, whereas the right-wing spins counterclockwise.

However, beginner-level players do not use these shuttlecocks as the feather shuttles are brittle and break easily.

Usually, shuttlecocks used in competitive matches and tournaments have 16 feathers, whereas some shuttles also hold 14 feathers; such shuttles are used in friendly matches or for practising. Nylon shuttlecocks are generally made from plastic and other synthetic materials.

These shuttlecocks are used by beginner and recreational level players.

Also, they are cheaper as compared to the feather shuttlecocks.

Rather than this, nylon shuttlecocks generally decelerate slower than feathers, usually resulting in a faster-paced game with less control or touch play.

BWF has developed a new shuttle, especially for AirBadminton.

AirBadminton is an outdoor form of this racket sport, played using a racket and a newly designed shuttlecock called the AirShuttle.

AirShuttle is designed for outdoors and is slightly different from the normal shuttlecock, which provides more stability and is more wind resistant.

Characteristics of a shuttlecock Now let me define to you the characteristics of a well-designed shuttle:

Speed of the shuttle

The shuttle’s speed is affected by factors like moisture, wind, and temperature, which you will read in the next paragraph.

These numbers indicate that the smaller the number, the lighter and slower the shuttle will travel, and vice versa.

The cork indulged in the shuttle head for competitive tournaments is made up of softwood, which generally has a low density.

This softwood is wrapped with synthetic PU leather.

But the shuttlecocks used for practising and domestic badminton tournaments hold leather or a rubber cork at their end.

Weight of a shuttle

The weight of a shuttlecock is categorized according to its grain numbers as per:

So now you must have known that players generally use three types of badminton shuttlecocks.

And I suggest you choose a shuttlecock according to your skills and game level.

If you are a beginner or a recreational player, you can play using a nylon shuttlecock, whereas intermediate and professional players can play with feathered shuttlecocks.

And if you are playing this sport for fun, go for plastic shuttlecocks, which are highly durable and best for practising.

Also, if you face any problems or have any questions in your mind regarding this post, then feel free to ask us or pin it up in the comment section below.