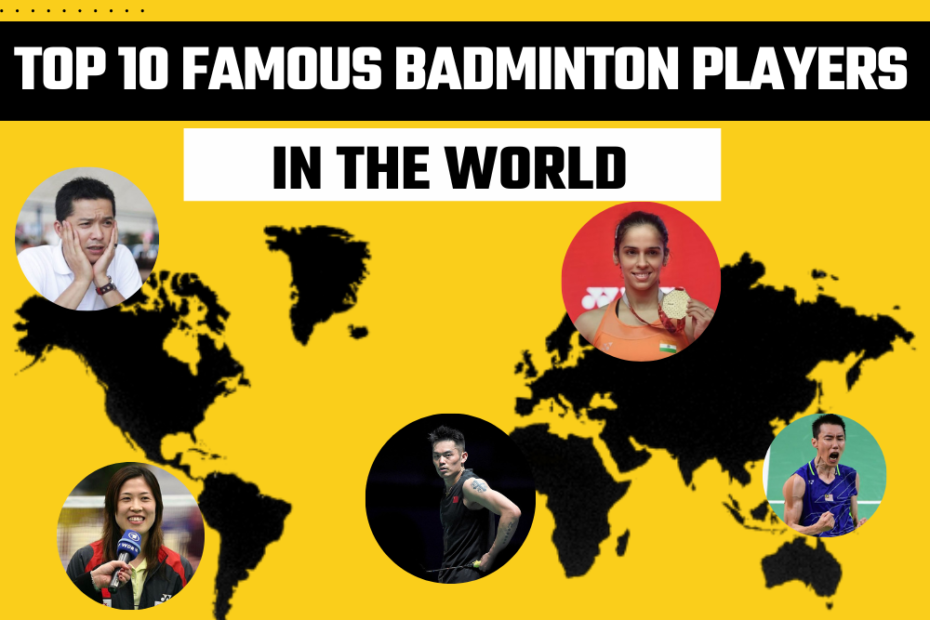 Badminton is one of the most commonly played sports worldwide.

And since this sport was included as an Olympic sport, its popularity has doubled, increasing the millions of fans worldwide.

Besides, this sport is governed and looked after by an authority known as BWF.

This authority provides the most ranking points to the players worldwide.

And according to the BWF ranking here, I have mentioned some top players in the world:

10 Famous Badminton Player in the World He was born in Fujian, China.

At a young age, Lin’s parents forced him to learn Piano and become a Pianist, but he preferred to play this sport instead.

So he started his training sessions at the age of 5.

At age twelve, he won the national junior championship, after which he was scouted by the People’s Liberation Army Sports Team.

And in 2001, when he was 18, he was selected for the Chinese National Team, after which he started his international journey.

He is a two-time Olympic medalist, won five world championships, six times All England Championship, and 5 gold and 3 bronze medals in the Uber cup.

There is no international tournament in which Lin Dan didn’t participate or win.

Also, Lin Dan is the only player in history to complete a super grand slam at 28.

All experts and his fans consider Lin Dan one of the best players. He is a former world and Olympic champion in men’s singles.

Also, many of his fans and experts appraise him as a legendary player in history.

Taufik Hidayat won one gold, one silver, and two bronze medals in the world championships.

And he even holds the record for registering the fastest smash in history in the 2016 World Championship in singles with 305 km/hr. Gao Ling was born in the Hubei region of China.

She is one of the best doubles players in the history of women’s badminton.

Also, she had an amazing career in singles, according to her dominating gameplay.

She is also well known for her anticipation, consistency, gaming style, and sporting smile.

Gao Ling began her career at a very young age of, eight years, and won every title available in this sport.

Gao Ling won four medals in the Olympics, including two gold, one bronze, and one silver. Sania Nehwal is one of the best Indian professionals and most successful players.

She has won 24 titles, which include 10 super-series titles, and also represented her country, India, in the Olympics almost three times.

And won an Olympic bronze in her second appearance at London Olympics, which were held in 2012.

Saina Nehwal began her international journey after winning the World junior championship in 2006. Also, she created history by winning the Asian Satellite Badminton Tournament twice and became the first player to win this feat.

She won a gold medal in singles at the Commonwealth Youth championships.

In 2014, she defeated Wang Yihan and won the Australian super series.

She won a bronze medal at the World badminton championship in 2017, and in 2018 she won two gold medals in singles and mixed doubles at Commonwealth Games. He is the only player from Malaysia who held World No 1 ranking for more than a year.

Lee began to play this sport after inspiration from his father, Lee Ah Chai, who was a badminton player too.

And later, in February 2009, he was appointed by UNICEF Malaysia’s National Ambassador, after which he began his international journey.

Also, if you want to know more about Lee’s journey, then you can check out his autobiographies named:

Lee Chong Wei won a gold medal in the Asian championship, two silver medals in Olympics, and three silver and bronze medals in the World championship.

Also, he won four gold medals in the Commonwealth games, one silver and three bronze in the Thomas cup, and one gold and silver in the Southeast Asian games. He played for Indonesia at the start of his career and later went to play and coach the US after 2001.

Also, he was considered one of the best players in men’s doubles in badminton history.

Tony Gunawan won a gold medal in Olympics for Indonesia, and later, he won the world championship for England.

He won a gold medal in the 2000 Summer Olympics in Sydney, Australia.

Rather than this, he won two gold medals in the Thomas cup and one silver and a bronze medal in the Sudirman cup. He belongs to Mino village of Kagawa district of Japan.

Momota is well known for his amazing skills and relentless playing style on the court.

And today, he is ranked as World’s No 1 singles player.

His career in this sport began when he studied in 2nd standard at an elementary school, where he used to participate in different tournaments.

But his international journey began in 2011 when he won a bronze medal in boys singles at Asian Junior Badminton Championship in Taipei.

In 2012, he won the title of Swedish Masters and Australian Internationals.

Kento Momota has won many major tournaments, which include two Asian championship titles and one All England title.

He remained the world champion for two consecutive years, 2018 and 2019.

Rather than this, he won three silver medals at the Sudirman cup and one silver, one gold, and two bronze medal at the Thomas cup.

Momota also listed his name in the Guinness world record for “The most men’s singles titles in a season” for his achievements by winning 11 in the 2019 season. Axelsen began his journey at age six after his parents were divorced, and at the age of 17, he joined the national team.

After which, he won the National Junior Event in singles and doubles in 2006 and 2008.

Later in 2009, he began his international journey.

And today, with his efforts and success, he has put Denmark on the map in the realm of badminton tournaments.

He won a bronze medal in Rio Olympics 2016 in men’s singles and a gold medal in Tokyo Olympics in 2020.

Axelsen received a bronze and a gold medal in BWF World Championships.

He won 11 gold medals in European Championships, 2 in men’s singles, 4 in a mixed team, and 5 in men’s team.

Also, he received a gold and a bronze medal in the Thomas cup. He was the former World No.1.

He occupied the top men’s singles ranking for 76 consecutive weeks from December 2014 to June 2016.

At a young age, he showed his talent, and after turning seven, he joined a sports school in Jingzhou in 1996.

Later he joined the Xiamen team, and in 2005 he was selected to join the national youth team.

And in 2006, he entered the second national team.

Chen Long began his international journey in 2007 when he played and won the Asian and World Junior championship.

In 2009 he played and won his first professional tournament at the Philippines Open.

Chen Long won one gold, one silver, and one bronze medal in Olympics in men’s singles.

He won two gold and two bronze medals in the World championships. Another amazing player from Denmark who is well known for his brilliant footwork, pace, aggression, and court coverage.

He took retirement from this sport in 2012 after losing in the quarter-finals of the French Opens.

Peter Gade is also judged as the most technically gifted player.

Also, he represented his nation for four consecutive years at Olympics from 2000-2012.

Also, he won the European Championship 13 times and brought gold home in all these 13 tournaments.

Rather than this, he also won two silver and three bronze medals in the Thomas Cup.

So this is it, above I have listed down all the popular and top badminton players in th world who made their country proud.

They are idols of many rising players who have proven that hard work often pays off.

If you want to become a player like them, remember that nothing is impossible with the right mindset and hard work.

And in case you face any problems or have any questions in your mind regarding this post, then feel free to ask us or pin them up in the comment section below.