Home » How To Play Good Badminton Singles (A Complete Guide)

How To Play Good Badminton Singles (A Complete Guide) 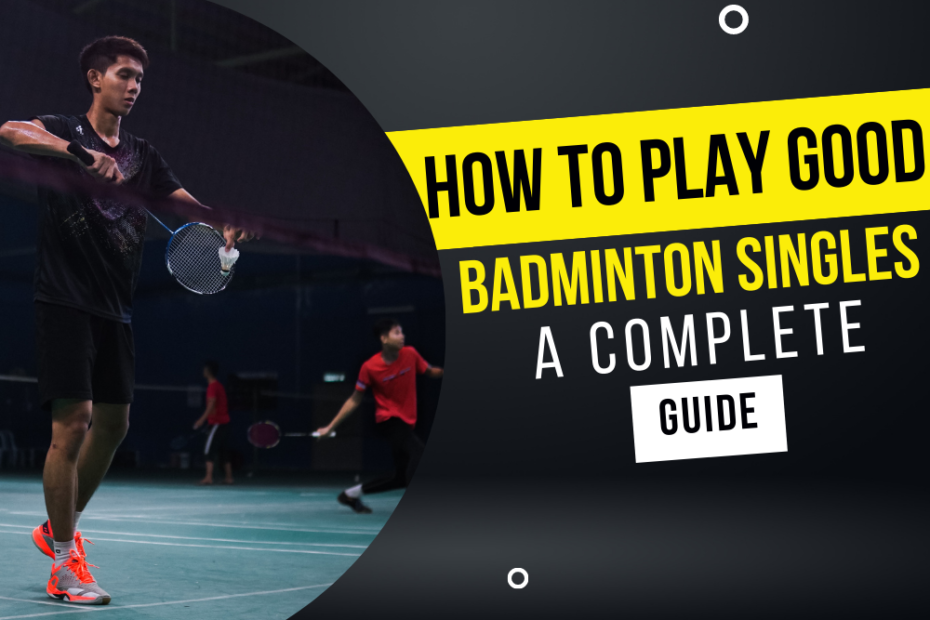 Badminton is a racket played using a racket that helps to hit the shuttlecock across the net.

It is commonly played in two different forms: Singles and Doubles.

In singles, there is one player per side on the court (one against one).

While in doubles, there are two players per side on the court (two against two).

Singles and doubles court sizes and their rules and regulations are also different, and players must play according to them.

There are so many aspects of this complex game, and here I’m to share my views on how one can play good singles:

How to Play Good Badminton Singles 1. Control your base point

In badminton singles, there is only one player on each side of the court, and they must cover the entire court by themselves.

Sometimes this could be tough, which might not allow the players to recover and reach their base position in time.

Now let me inform you how one can control his rallies.

Play powerful and deep clear and lifts to the opponent’s rare court.

It will provide you sufficient time to recover and take your base position.

2. Work on your footwork

Speed is one of the essential elements in badminton, and it plays a significant role while playing singles.

In singles, the player has to cover the whole court by himself and reach the shuttle anywhere on the court.

And then recover to his base position, where you must combine your movements by practicing and mastering different footwork drills.

Also, to improve your footwork drills, you must work on your split step and develop your muscle memory.

Now let me explain what a split step is.

A split step is like widening your stance, which helps you prepare for the next shot.

Here you need to widen your feet according to your shoulders length and slightly bend them.

This stance helps you to change your directions frequently while playing.

3. Try not to give free points

Each game holds 21 points, and you must focus on not giving your opponents free points.

Also, mistakes and errors will make you lose points in the game.

I know sometimes the situation isn’t in your hands, but you still need to keep some points in your mind like:

And if you do not want to lose your points, then you need to master all the basic skills and look at our post Learn Badminton 7 Easy Step: A Complete Beginner’s Guide.

It will help you to play more effectively, and it doesn’t matter if you win or lose, but it will make your opponent work hard for points.

If you want to keep your rallies at a high pace without losing control and which forces your opponent to move to the defensive position.

Then play your shots with aggression.

It won’t allow your opponent to consider what they can play next.

They will try to attempt the shot, which can be an advantage for you and give you a chance to earn a point.

Mastering net shots are one of the players’ plus points, especially when you love to play badminton singles.

Net shots are played from the net; if played correctly, the shuttle lands close to your opponent’s court near the net.

Also, let me inform you that spinning net shots are more effective and hard to perform.

Here the shuttle lands very close to the net, forcing your opponent to play a lift so that you can respond with a powerful attacking shot.

It will help in controlling the rally and win a point.

In case you want to learn and master this shot, then you need to follow these points:

If you want to score more rallies than your opponent, you need to learn and analyze their gameplay and how they respond to your shots.

It will give you a clue about what kind of shot he will play next.

Remember: Some professional players make it look more complicated, especially when playing overhead shots from the backcourt, as clear, drop, and smash all look the same.

Here are some points that you can analyze in your opponent while playing:

If you limit your opponent’s options and shots, it’s clear that you can win more points than your opponents, and you will be at an advantage.

All you need to do is perform some high and lengthy shots to the baseline of your opponent’s court.

It will force your opponent to return with a clear, drop, or half smash.

Also, avoid playing near the net and try to keep him in his defensive position.

Now let me give you an example:

He is a brilliant badminton player who always limits his opponent by playing some lengthy and accurate shots.

Rather than this, here are some points that you can apply in your game to limit your opponent’s options:

A player must be physically strong if he prefers badminton singles over doubles because you need to cover full court individually here.

But that’s not sufficient.

Because if you want to score more points and win a rally, you need to be mentally strong too.

And self-confidence plays a significant role while playing singles.

It would help if you remained calm, positive, and motivated despite losing points.

All you need to do is believe in yourself and work hard to recover that point.

It will help you in improving your game exponentially.

9. Aim at the corners

If you want to stay at your base position and be prepared for the next shot, you need to force your opponent to the deep corners of his court.

It will also help you limit their options and give you sufficient time to recover gently.

But hitting an easy shot can disadvantage you and make you struggle for the next shot.

10. Play inside the boundaries and follow the service rules and regulations

In singles, players usually use the inner sidelines and the entire length of the court.

And one should play inside the boundaries of these sidelines.

You will best understand with the help of a diagram given below: Rather than this, there are some service rules that you need to keep in your mind:

Your feet must be on the court surface while performing a serve.

If you love to continue the rally, these points will help you play badminton singles more effectively.

To play singles, you should be mentally and physically fit because the player needs to work hard to score a point.

Also, you should be focused on your opponent’s moves and shots, which can prepare you for the next moves.

Rather than this, it will allow you to play good singles.

And if you still have doubts or are there any questions going on in your mind regarding this post, then feel free to ask us in the comment section below.