Home » How to Hold a Badminton Racket (A Complete Guide)

How to Hold a Badminton Racket (A Complete Guide) 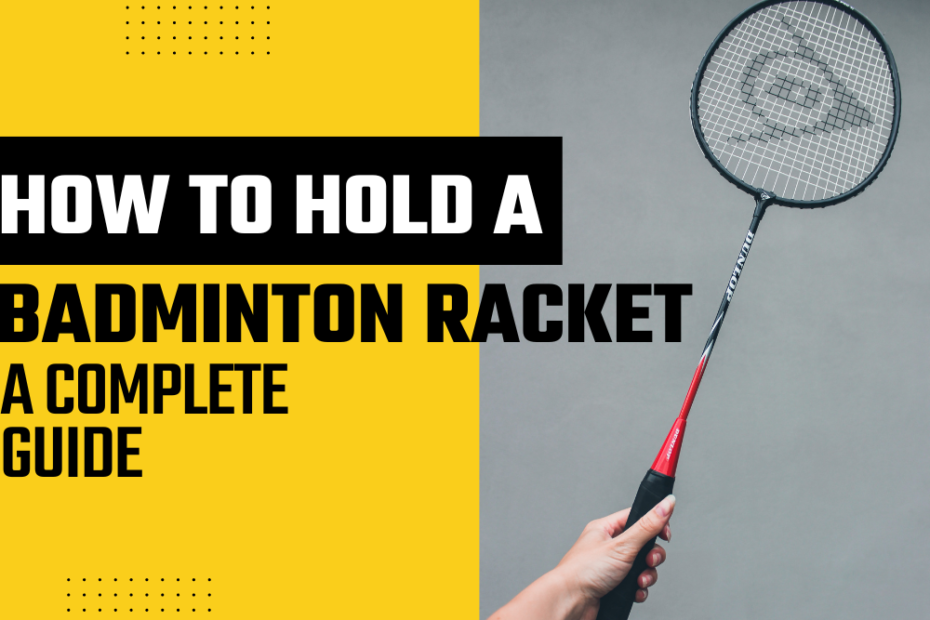 Badminton is one of the fastest sports and is played using a racket, which is used to hit the shuttlecock from one court to another.

This sport is about applying different strategies and techniques, allowing you to win more rallies.

And one of the basic techniques is to hold the racket correctly with the right handle grip.

The handle of your racket is octagonal.

It holds 8 sides which are known as bevels.

And these angles allow you to obtain a perfect hold on your racket.

A proper grip is required to play and learn different strokes while practising or playing.

And all these techniques rely on your wrist motion and its flexibility.

So it would help if you learned to hold a racket properly to give your best.

It also helps you to gain more confidence and power during the match.

Now let’s begin with the basics:

How to Hold a Badminton Racket Ideally

There are four different techniques for holding a racket, which are as follows:

Starting with the first one:

It is one of the most accessible grips to learn and perform.

With the help of a forehand grip, you can even learn other grips.

However, the forehand grip feels like shaking hands with your friends.

Take a racket to learn how to perform a forehand grip.

Then place your hand on the face of the racket and slide down to the handle.

And close your three fingers and your thumb while leaving your forefinger separate.

It should make a V-shaped space between your thumb and index finger.

It will give you extra incredible power while swinging and hitting the shuttle.

Also, try not to hold the racket very tightly.

So that it won’t create problems while changing the grip.

The backhand grip is the second most used grip.

It is also known as a thumb grip and is slightly similar to a forehand grip.

Place your thumb on the wider section of the badminton racket handle to perform this grip while the racket’s strings must be facing upwards.

There are two different types of backhand grips used by the players:

The backhand grip is slightly different from the forehand grip and somewhat similar to the panhandle grip.

While using this grip, you need to place your thumb in between where the vertical and horizontal faces of your racket handle intersect each other.

This grip is used to perform a backhand clear, backhand drop shots, and while performing cross drop while returning a smash.

Many people confuse a panhandle grip and a backhand underarm clear grip.

So let me clear your doubt:

A panhandle grip seems similar to holding a pan.

But the clear, underarm grip is held using your thumb and fingers.

This grip is used to perform an underarm backhand clear shot while you are trying to lift the shuttle from the net area of the backcourt.

Most people use a forehand grip for performing smashes.

But they need to know that there is a different badminton grip used for playing smashes.

And it is performed with the help of a forehand grip, where you need to move your racket slightly at 10 degrees.

However, a forehand grip can make your smashes look ineffective.

So it would help if you switched with a smash grip.

Now you must be wondering what the difference between these grips is.

If yes, then let me inform you about it.

While using a forehand grip, the head of the racket is vertical to the ground.

But the racket head is mildly angled about 10 degrees in a smash grip.

And forehand grip will not provide you with sufficient power and speed compared to a smash grip.

Smash grip helps you transfer power from your shoulder to your wrist and, finally, racket.

Rather than this, everything is the same.

The net shot grip is usually used for playing shots close to the net.

And there are three different kinds of net shot grips:

This grip is slightly similar to a forehand grip.

But here, you need to hold the racket in your fingers and rotate the racket with the help of your wrist and fingers.

It allows you to indulge in an exact amount of force and power while hitting the shuttle.

This grip is slightly similar to a backhand grip.

You must hold the racket with the help of your fingers.

There must be some gap between your palm and racket handle.

It will allow you to make delicate touches while playing a net shot.

Net kill grip allows you to hit the shuttle with the flat face of the  racket.

While you need to keep some space between your palm and racket handle.

It is an aggressive shot, usually performed to land the shuttle near the net.

It helps you to generate more power while hitting the shuttle.

And there are two different kinds of net kill grips, which include:

A forehand net kill shot is performed with the help of a forehand grip.

These shots are usually played on the racket side of the court.

A backhand net kill shot is performed with the help of a backhand grip.

These shots are usually played on the non-racket side of the court.

Good badminton gripping techniques and strategies can help you enhance your game and skills and prevent you from facing wrist and shoulder injuries.

Rather than this, these different gripping techniques allow you to perform different shots during the match or while practising.

And in case you have any queries or questions going on in your mind regarding this post, then feel free to ask us or pin up your questions in the comment section below.