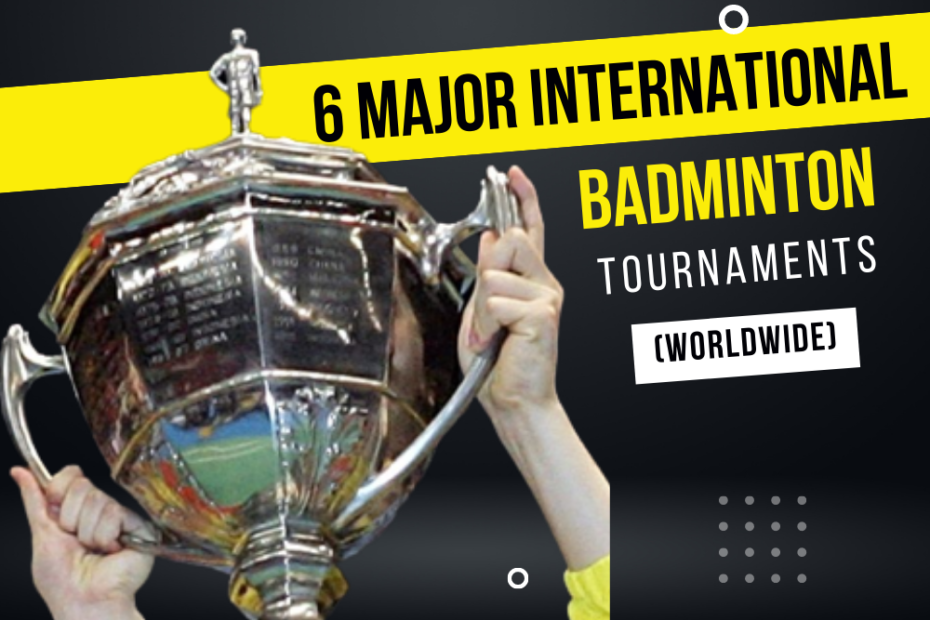 Many national and international tournaments are held yearly, and many badminton lovers participate.

These tournaments are usually organized to bring out the best in the players and give everyone the chance to play for life.

This sport is governed by a body called BWF.

And BWF has categorized international tournaments into three grades.

And here, we are going to discuss the grade 1 tournaments: Olympic games are some of the rarest and most significant worldwide tournament, which takes place every 4 years.

The first Summer Olympic game, which introduced badminton as an official sport, was held in 1992 in Barcelona, Spain.

In 1972 Munich Summer Olympics saw badminton as a promoted sport.

After two decades, in 1989, it was officially introduced to the Olympics.

In the 1992 Barcelona Summer Olympics, it has its debut as an official medal sport.

Here four medals were awarded for the first time, including two bronze medals.

In 1996 at Atlanta Summer Olympic Games, mixed doubles were introduced where men and women could share a court during the match.

Since 1996 there has been a playoff between the two semi-final losers to ascertain the only winner of the bronze medal.

And this format was continued by BWF till the 2020 Summer Olympics.

The 2020 Summer Olympic Games were delayed due to the covid crisis and held in 2021 in Tokyo. BWF World Championship started in 1997 and was held every three years till 1983.

It is promoted and supported by IBF (International Badminton Federation).

This Championship provides no cash prize to the players but helps provide more ranking points.

And the winning player gets the world championship title and gold medals.

BWF stands near the Olympics and is very important for badminton players.

This world championship was first held in 1977, and today, it is one of the top-global competitions.

When this tournament was held for the first time, 345 athletes from 47 member associations participated.

And it was broadcast in high-definition on television for badminton lovers all around the globe.

In the beginning, BWF World Championship was held every three years To fill the gap between the uber cup and Thomas cup.

But in 1983, this Championship was held every two years, alternating with the two-team Championship, and in 1984, it became a combined biennial. He was a British badminton, chess, and tennis player.

Also, he won All-England Championship 21 times, 2 British chess championships, and reached the quarterfinals at Wimbledon in 1911.

He presented the Thomas cup in 1939, which then was known as The International Championship Challenge Cup.

The height of the cup is 28 inches and 16 inches wide.

This cup is divided into three parts: a plinth, a bowl, and a lid that holds a player figure on the top.

The first Thomas cup tournament was planned to be held between 1941 and 1942 but was delayed due to world war II.

The First Thomas cup tournament was held from 1948-to 1949, in which 10 national teams participated.

And till now, only 6 countries have won the Thomas Cup in history.

These countries are Malaysia, Indonesia, China, Japan, Denmark, and India.

Malaysia has won this title approximately 5 times and has been runner-up most of the time.

Japan became the 4th country to win this title.

Denmark even won this title in the men’s double championship.

India tried a lot and reached the finals in the 1950s, but in 2022 they finally won the Thomas Cup title. Betty Uber was one of the finest players and has won 13 titles at the All England Open Championship, one in women’s singles, 4 in women’s doubles, and 8 in mixed doubles.

Also, she was inscription into the World Badminton Hall of Fame as an Inaugural Member, so Uber Cup was named after her surname.

The First Uber Cup tournament was held from 1956- to 1957 and is contested every three years.

But after 1984, Uber Cup was contested every two years, and the same year its venues and schedules were merged with Thomas Cup.

BWF, in 2007, decided to separate the finals of Thomas Cup and Uber Cup, but this proposal was abandoned by its members.

In 1956 Uber Cup Trophy was presented at the annual general meeting.

This cup was made by Mappin and Webb, the prominent silversmiths on Regent Street in London.

And if we talk about its champions, then, as usual, China is one of the most successful teams. It has won 15 Uber Cup titles.

Japan comes in the second number, which won this title six times.

And South Korea is the current champion winning the Uber cup Title. Sudirman Cup is presented for the World’s mixed team championships.

Sudirman Cup is named after Dick Sudirman, a former Indonesian player and the founder of the Badminton Association of Indonesia (PBSI).

Dick Sudirman also became the president of PBSI for approx 22 years. He earned a lot of respect after working with PBSI and other governing bodies like IBF and Asian Confederation.

Sudirman Cup is made up of 22-carat gold-plated solid silver.

The Sudirman trophy is 80 cm high and stands on an octagonal base of jati wood.

This trophy holds a unique design. It has a shuttlecock-shaped body, and its lid is designed after an Indonesian temple (Borobudur Temple).

The handles indulged in this trophy seem like stamens, indicating badminton’s seed.

And this trophy was made by Matrix Bandung Company, and it cost approx; USD 15,000 at the time when it was presented to IBF in May 1989.

The first Sudirman Cup was played in Indonesia at Bung Karno Stadium from 24 to 29 may in 1989, and 28 teams participated in it.

And if we talk about the victories, let me inform you that Indonesia won this title once in 1989.

And this tournament is never won by Non-Asian countries. All England Open Championship is one of the world’s oldest tournaments, organized annually in England.

And according to BWF’s latest grading system, it was given Super Series Ranking in 2007.

Later in 2011, this Championship was upgraded to Super Series Premier Ranking.

This Championship was held in 1898 in the English town of Guildford.

The first two tournaments of the All England Open were named “Badminton Association Tournament.”

Let me tell you something more about it:

Yonex, 12BET, BWF, and HSBC are some of its partners, making it one of the world’s most well-recognized badminton tournaments.

It attracts and draws thousands of people’s interest, and its partners also help promote this racket sport as a significant competitive sport worldwide.

The main objective of these badminton tournaments is to popularise this sport and make it one of the most significant competitive sports among people.

Some of these tournaments offer you some prize money, while others help you gain more ranking points.

But these prestigious tournaments help determine the player’s strength and give every child a chance to play for life.

And if you have any questions, feel free to ask us in the comment section below.