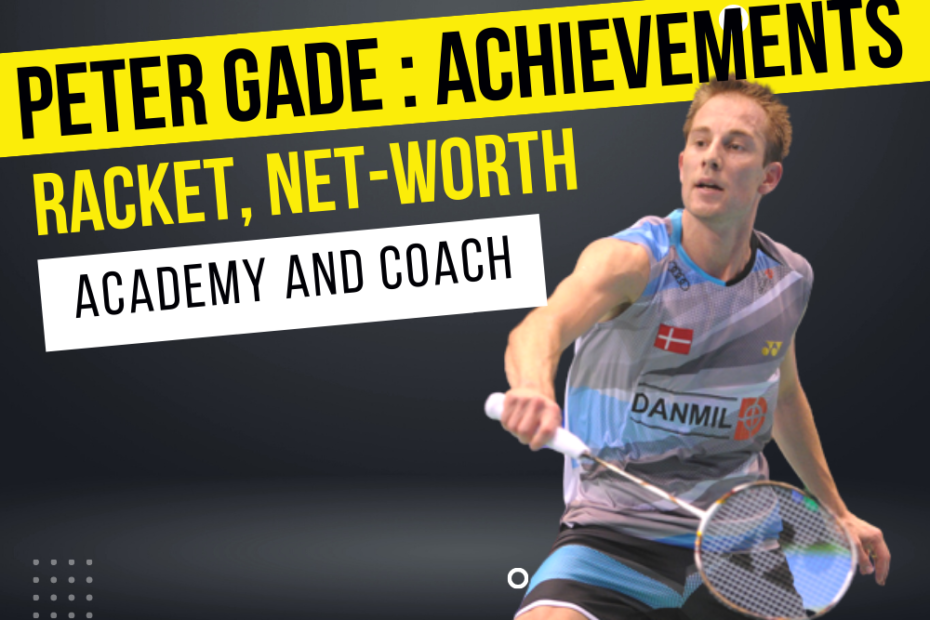 He took retirement from his international career in 2012 after losing in the quarter-finals of the French Opens.

Peter Gade is also considered the most technically gifted player of his time.

Also, he represented his nation for four consecutive years at Olympics from 2000-2012.

Achievements and victories of Peter Gade

Gade made his mark in badminton history through the All England Open Badminton Championships in 1999 and his five European Championships crown in the men’s singles event.

Rather than this, he had won many international tournaments, championships, and titles, which I have mentioned below:

Also, take a look at this video, where Peter Hoeg Gade is seen playing some of the best trick shots: Peter Gade was often seen playing with Yonex Arcsaber 10 racket, made in Japan, which is evenly balanced and holds a stiff shaft.

After which, ArcSaber 10 became a limited edition for Yonex Legend Peter Gade and mainly was opt and used by the men’s singles players.

With its balanced features, Arcsaber was one of history’s most well-known and widely used rackets.

It brings out the solid feel and control of the original Arcsaber 10.

This racket is a perfect choice for players who are all-round performers and offers plenty of speed and power, giving you fantastic net shots, smashes, clears and returns, all in one excellent package.

The primary source of Peter Gade’s wealth is being a badminton player.

Rather than this, he earned from the endorsements he signed with some top brands like Yonex and the prize money.

Also, the online estimates of Peter Gade’s net worth vary.

While it’s relatively simple to predict his income, it’s more work to know how much Peter has spent over the years.

Peter Gade has been a badminton lover’s favourite throughout his career.

He has always shown his love for the game differently and continues to promote this sport.

Gade has been involved with programs to develop the sport with young people.

And back in 2018, he founded the Peter Gade Academy for the upcoming talent.

His vision is to create a new platform and outset for badminton coaching, training and consulting in a more modern and unconventional way based on his great passion and dedication for the play.

Peter Gade is determined not to give up, as this has been a part of his life.

He has been a head coach for France for the last three years.

Specifically, this means that the former top player starts the ‘Peter Gade Academy’ as mentioned at the beginning, which will be an independent academy based in Gentofte Club in Denmark.

Here the purpose is to make the Academy more modern and, at the same time, meet the demands that come from both Danish and international players in the future. Lars Uhre was the national coach of the Danish badminton team, and Peter Gade used to take his sessions under his guidance.

He completed his graduation from the University of Copenhagen in 2002 and held a bachelor’s degree in sports science and English.

Afterwards, he worked as an Olympic coach for the Finnish badminton team from 2001 to 2006.

And from 2006 to 2010, he was assisted as an assistant national coach of the Danish national team.

Later in August 2010, he was promoted to coach of the Danish national team.

After sharing his skills and training many Danish players, he finally took retirement from his work in 2016.