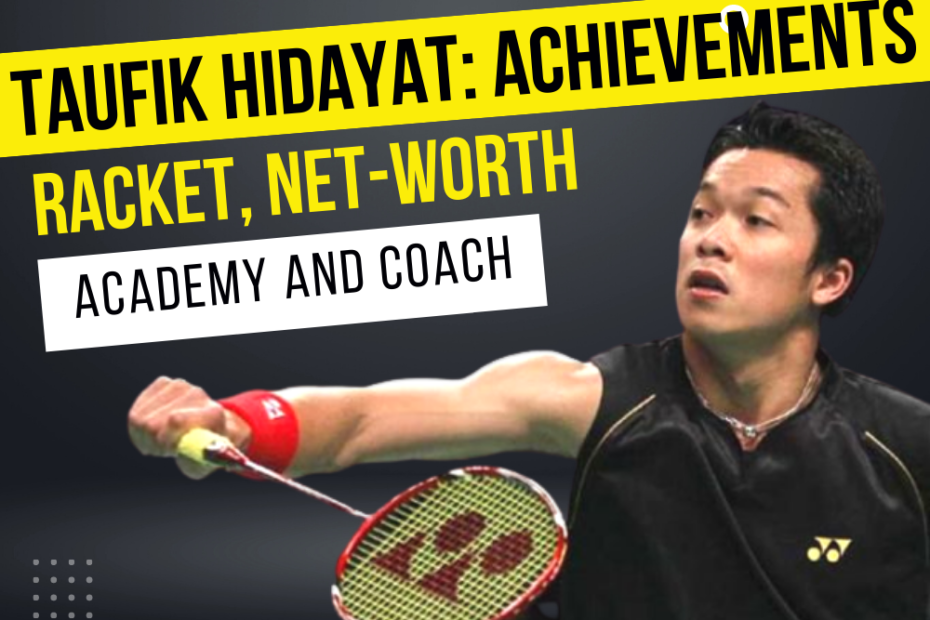 He is a former world and Olympic champion in men’s singles. He is well-known for his smooth footwork, drop shots, deceiving net play, and forehand jump shots, which allow him to dominate the opponent on the court.

Also, many of his fans and experts appraise him as a legendary player in badminton history.

Taufik Hidayat became one of the premiere players in the world due to his overpowering backhand and forehand.

Taufik Hidayat is a former Olympic, World, Asian Games, and Asian champion and the youngest world number one in the men’s singles.

Also, he had won a total of 27 international titles in his career and is widely regarded as one of the greatest badminton players of all time, which includes:

Also, take a look at this video, where Taufik Hidayat can be seen playing some of his best shots and rallies:

Now let’s discuss the types of rackets that Taufik Hidayat used and played with throughout his career:

This racket is made in China and developed in Japan and provides awesome power to the player while playing smashes and other offensive shots.

Taufik used Yonex Armotec 700 old colour racket during 2003-2005 as the clears are relatively effortless, and the head heaviness aids in power generation.

This racquet feels head-heavy and ‘heavy’ compared to all modern Yonex racquets.

Taufik played using Yonex Armotec 700 new color in 2006 as this racquet is a double edge sword.

On the one hand, you get unsurpassed firepower from this beast and trade power defense.

At the end of 2006 and early 2007, Taufik used Yonex Armotec 900 Power for his offensive and attacking gameplay.

Yonex Armotec 900 Technique racket is made using Yonex’s Latest technologies and was predominantly designed and launched for tactical and semi-offensive players.

It helps the players to produce and control power.

Peter Gade and Taufik Hidayat are the two top badminton champions and Olympic medalists who used this racket during their era.

The frame of this racket is designed to flex at a point of impact to hold the shuttle on the string bed for longer.

Taufik played all his tournaments and matches using Yonex Arcsaber Z Slash in 2010.

Taufik signed an endorsement with the Yonex, and in the middle of 2010, Taufik switched his racket and opted for his signature Yonex Arcsaber Z Slash Taufik Hidayat.

This racket is best for those players who want to increase the power and speed of their smashes.

Yonex Arcsaber Premium racket was launched in 2012 and had the latest and greatest technology for enhancing speed and control.

And after its launch, Taufik Hidayat played with this racket in 2012 to check its features.

Arcsaber 11 is an even-balanced racquet for explosive all-around play, and in 2013 Taufik Hidayat used this racket to play some of his competitive tournaments and championships.

This racket was launched by Yonex, based on an Olympic gold medalist, Taufik Hidayat preference and was a special limited edition.

And during the middle of 2013, Taufik Hidayat switched to this racket and used it till his retirement.

Rather than this, here’s the complete list of badminton rackets used by Taufik Hidayat throughout his career:

Also, he is one of Indonesia’s most successful celebrities and the wealthiest player.

Taufik’s primary source of income is being a professional badminton player.

And according to the research, Taufik Hidayat Estimated Net Worth in 2022 is between $3 Million – $5 Million.

And if we talk about Taufik Hidayat’s previous year’s net worth, it was approximately $1,5 Million – $2 Million.

Where did Taufik Hidayat take his training?

Taufik Hidayat was born in Bandung, Indonesia and today, he is counted in the list of top Indonesian badminton players.

He started his journey in this sport at the very young age of nine, after which he made his international debut in 1996.

Taufik joined the Bandung-based badminton club known as SGS Club as a young man, where he took his training under the guidance of Iie Sumirat.

In one interview, he stated that his father forced him to play this sport, after which he joined Pelatnas in 1996 and started taking his sessions under the guidance of Mulyono and Joko Suprianto, after which his career was decorated with silvers and golds.

His facility holds classes for anyone who wishes to get into this sport or improve their skills.

The Taufik Hidayat Arena is also a badminton hall where people can learn and play badminton or practice their skills.

Taufik’s playing career came to an end when the past World Champion took retirement in 2014.

Mulyo Handoyo is a top Indonesian coach who is well-known for his heroics in coaching one of the best shuttlers in badminton (Taufik Hidayat).

Handoyo trained Taufik Hidayat from 1996 until his retirement at Pelatnas and remained his mentor throughout his career.

In one of his interviews, Taufik Hidayat states, “Mulyo Handoyo can turn a player into a champion.”

According to the news and research, it is said that this tough Indonesian badminton coach is now training Indian Shuttles at the Pullela Gopichand academy in Hyderabad and assisting national head coach Gopichand.

After which, Taufik Hidayat stated that “India’s decision of getting Indonesian coach Mulyo Handoyo on board was just the right investment.”