Home » Which are the top 10 badminton racket brands?

Which are the top 10 badminton racket brands? 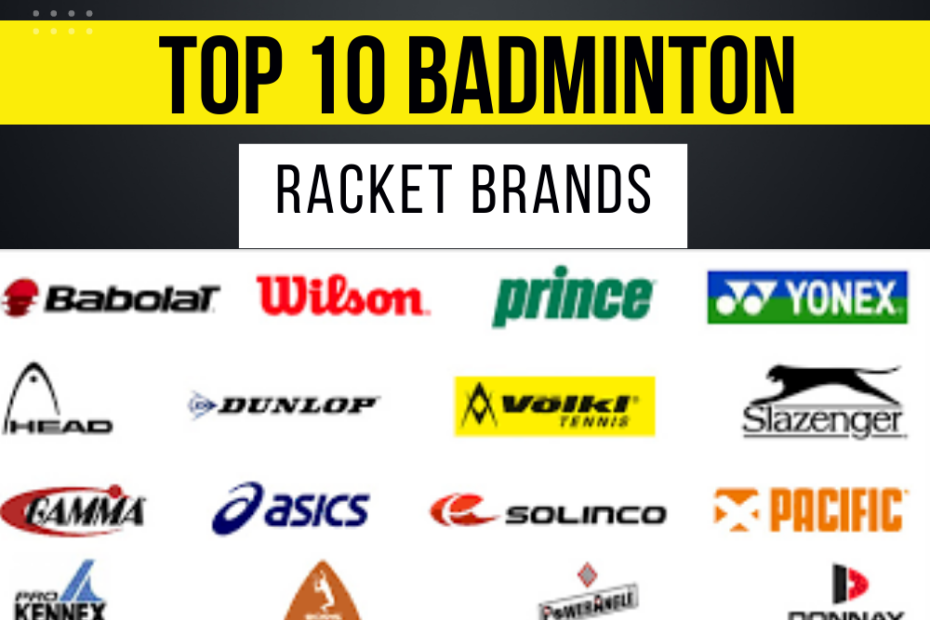 Badminton is generally a racket sport, usually played on the court and using the right equipment can help you drastically enhance your skills.

A racket is one essential gear used by a player to hit the shuttle from one side of the court, so a player must use a well-designed and suitable racket to play on the court.

And there are various brands available in the market that deliver ideal rackets for the players according to their game level.

So let’s check out some of these top brands:

Yonex is the most popular brand among the players and is well-known for its under-budget badminton rackets.

It is a Japanese company founded in 1946, but it was only in 1957 that it began to manufacture rackets.

And today, Yonex is at the forefront of driving the sport forward using the latest technology and materials. It provides a perfect racket for your game level, whether you are a beginner, intermediate, or professional.

Rather than the rackets, Yonex also designs and manufactures a range of clothing, footwear, bags, shuttlecocks, strings, and even other sports accessories.

Also, it is one of the biggest sports sponsors, as it sponsors many tournaments.

And due to its tremendous goodwill and popularity in the market, you must have seen many professional players (who don’t compromise with their game) playing with the Yonex racket.

Overall I would say that Yonex is a superb-quality racket manufacturer.

And you can’t go wrong choosing a racket that fits your needs from this brand.

Some of the best Yonex badminton racket series are: Li-Ning is another famous brand among the players and in the badminton world.

It is a Chinese brand founded by a former Olympic gymnast, Mr Li-Ning; in 1989, he started this company to provide brand-name clothing for Chinese athletes at the Olympics.

And now, it designs and manufactures some of the best rackets, footwear, and some other sporting accessories along with clothing.

The brand Li-Ning always takes pride in making the “most aerodynamic rackets possible,” based on their data from field research to match the player’s ability and skills.

Li-Ning has some of the highest quality rackets you can get.

Some of the best Li-Ning racket designs are:

Victor is just another big name regarding rackets and other badminton equipment.

It is a Taiwanese brand and company Chen Den Li founded in 1968.

Victor started in Taipei (capital of Taiwan), and today it delivers its products in more than 60 countries spanning five continents.

Also, this brand has come to the forefront of the sport.

It not only produces excellent rackets but also designs and manufactures clothing, footwear, and other sports accessories.

Rather than this, Victor also sponsors many of the tournaments.

Some of the best Victor badminton racket designs are:

Ashaway is an American company that was founded in 1824.

In the start, they used to manufacture fishing lines, and in 1949 they began to work with racket strings.

In 2009, this company introduced the ZyWeave core technology, which was believed to be the thinnest badminton string ever produced in history.

And today, Ashaway also designs some of the best and top rackets, which professional players use.

Rather than this, Ashaway is also a world leader in producing bulk, non-sterile and non-absorbable medical threads and custom braided products.

Some of the best Ashaway badminton racket designs are: Wilson has been a subsidiary of Finnish multinational company Amer Sports since 1989.

It designs and manufactures many sports equipment, which includes: rackets, balls, attire, and other sporting accessories.

Wilson is an American sports equipment manufacturer based in Chicago, Illinois.

Also, they have been owned by the Finnish group Amer Sports since 1989.

Rather than this, Wilson designs some of the amazing badminton rackets, which include:

FZ Forza is a Denmark-based company founded in 1990 by Mark Christiansen.

It provides players with an excellent range of rackets, clothing, footwear, and other sporting accessories.

Their badminton ranges are broken down into an easy-to-understand set of ranges.

These cover the classic range, which is aimed squarely at the beginner level.

Meanwhile, the rest of the range is aimed at the player’s preferred style, such as power or control.

Usually, FZ FORZA rackets and products are well known for being at the forefront of technology.

And here are some of the top FZ Forza racket designs:

The brand Carlton is a British sports equipment brand initially established in 1946.

It majorly focuses on badminton and tennis.

And if you are a beginner and looking for a racket for yourself or your loved ones, opt for a Carlton-designed racket, as it offers plenty of options for beginners and casual players.

They also offer a professional range of rackets at fair and reasonable prices.

Rather than rackets, Carlton also designs and manufactures shuttlecocks and footwear.

Some of the top Carlton racket designs are: Babolat is another supplier that designs and manufactures some of the best badminton rackets.

They sell everything, which includes rackets, shuttlecocks, strings, grips, bags and shoes.

As with many sports equipment makers, there produce a full tennis range too.

Some top Babolat racket designs are:

Apacs was established in 2002 to promote and distribute high-quality sports equipment in local and international markets.

But unfortunately, Apacs delivers its products only in Asia, the United Kingdom, and some parts of Europe.

Apacs not only produce badminton rackets but also sells clothing and footwear along with bags, shuttlecocks and various accessories.

Some top Apacs racket designs are: Talbot Torro is a German/British brand.

You may need to be made aware of this brand.

As Talbot- Torro was formed from a merger between two companies.

However, the company was taken over during the 90’s by Schildkröt Sports articles.

Meanwhile, The Torro Company started life in Hamburg, Germany, during the eighties.

However, by 1992 the Talbot and Torro companies merged, becoming the Talbot-Torro brand we see today.

These were some of the top badminton racket brands that deliver amazing and featured rackets.

Most also produce other supplies such as footwear, bags, clothing and shuttlecocks.

So if you are looking for a suitable racket for yourself or your loved ones, you can opt for any of these brands.

And in case you face any problems or have any questions in your mind regarding this post, then feel free to ask us or pin it up in the comment section below.

1 thought on “Which are the top 10 badminton racket brands?”