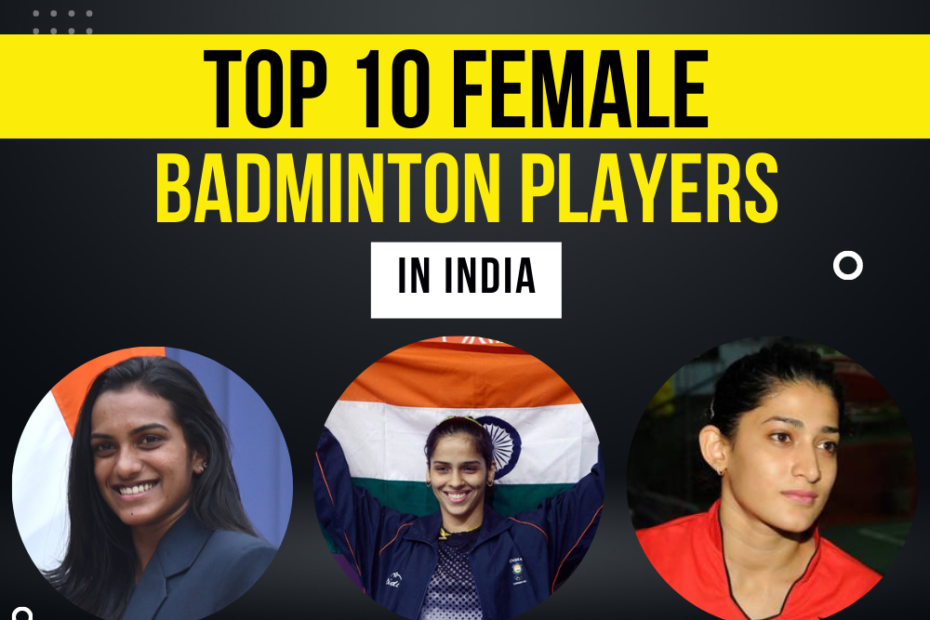 It becomes a proud and historic moment for a person when his national flag rises higher than any nation’s flag.

And if we talk about India, badminton is the most common sport played after cricket.

BAI governs this sport in India.

And according to the current BWF ranking, Indian female shuttles like P.V Sindhu and Saina Nehwal are among the top 10.

Jwala Gutta and Ashwini Ponnappa are ranked in the top doubles list by BWF.

So let’s take a look at all these top female players who transformed the face of Indian badminton: She is the first Indian woman to win silver in Olympics, which were held in Rio de Janeiro in 2016.

Also, she is the youngest player to date with this title.

She was also honoured with India’s third-highest civilian award, Padma Bhushan, in 2020.

Sindhu holds a sports background where his father, P.V Ramana himself, was a former professional volleyball player and used to play for the Indian men’s national volleyball team.

But apart from it, Sindhu chose this sport and started taking her sessions under the guidance of Pullela Gopichand, a former Indian badminton player.

She started playing at eight and decided to make a career in this sport.

Also, she begins her international journey at the age of fourteen.

And today, with her performance, she has become a national icon. A former world no. 1. Sania Nehwal is an Indian professional and most successful badminton player.

She has won 24 titles, which include 10 super-series titles.

She represented her country, India, in the Olympics almost three times.

And won an Olympic bronze in her second appearance at London Olympics, which were held in 2012. She belongs from a sports background, where his father was a hockey player and used to play hockey for India.

But she preferred badminton over hockey and began her career in this sport at a very young age.

She represents India on the international circuit in both singles and mixed.

She holds an amazing partnership with Jwala Gutta, and together they have represented India at the international level and won many championships and medals.

Their pair was consistently ranked among the top 20 in the BWF world ranking.

In 2017, Ashwini Ponnappa married Karan Medappa, a model and a well-known businessman. Jwala Gutta is very popular among the other female players.

She started playing at six and has made a good career in this sport.

This 5 ft 9 in tall lady loves to play an aggressive style and remains undefeated in the front court because of her skilled netplay, good anticipation, and the ability to perform some deceptive strokes at the net.

She remains 14 times the winner of the national championship in doubles.

Also, she represented India worldwide in many international tournaments and championships.

She began her journey as a professional player in 2007 and retired in 2017.

And in these past years, this amazing left-handed shuttler bagged many medals in the doubles category for India in World Championships, Commonwealth Games, South Asian Games, and Asia Championships.

She has the best pair with Ashwining Ponnappa in women’s singles and V.Diju in mixed doubles.

Talking about her personal life. Her father, Kranti Gutta, is of Telugu origin and belongs to a family of freedom fighters.

Whereas her mother, Yellen Gutta, belongs from China and came to India in 1977.

In 2005 she married Chetan Anand, also a badminton player, but their relationship didn’t work, and it ended in 2011 when she divorced Chetan Anand.

And on 22 April 2021, she married Vishnu Vishal, a Tamil actor and a producer. Rituparna Das is one of the top-ranked international Indian female badminton players who predominantly competes in the singles category.

She gained fame after winning the under-13 champion in 2008 with her performance and playing style.

After that, Pullela Gopichand managed to move her from her native place, West Bengal, to Hyderabad Academy and train her under his guidance.

She faced over 122 wins in her career, including all category tournaments.

Rituparna started playing with a BWF rank of 63 and reached her career highest ranking of 44. She created history in 2014 and 2016 by winning bronze medals at the Incheon Asian Games and Uber Cup.

She represented India at many international tournaments and competitions in women’s singles.

And today, she is a head coach and a member of the Bussiness Development Team at the Gulf badminton academy in UAE – a venture under Mr Pullela Gopichand. Gadde Ruthvika Shivani was born in a Telugu family to G.Bhavani Prasad and G. Prameela Rani as a second child.

Her father was a businessman, and her mother was a housemaker.

She took an interest in this sport from age five, and in 2002, she started taking her sessions.

But in 2010, she made her first debut as an International sub-junior and won a bronze medal in the women’s doubles category at Badminton Asia Youth U17 and U15 Championships.

In 2012 she joined Pullela Gopichand Academy and won many medals and titles like Russian Grand Prix.

She was a national champion in sub-junior, junior, and senior-level categories in all age groups.

And she won a total of 115 national medals and 20 medals at the international level in her career. PC Thulasi was a part of the Indian national badminton team.

She was the women’s singles national champion in 2016.

Also a gold medalist in 34th National games 2015 in singles against Telangana. She won the Brazil and Russia Open Grand Prix title in mixed doubles with his partner Pranaav Chopra.

They both even won a gold medal at the South Asian Games.

She also performed in BWF at two levels, firstly women’s doubles in 2017 with Ashwini Ponnappa in Syed Modi International Tournament, where they remained the second runner-up.

Rather than this, in 2019, she has the highest ranking of 17th in women’s doubles and 25th in mixed doubles.

Also, she was awarded an Arjuna Award by the government of India. She represented India at the women’s team event at the 2010 Asian Games.

Also, she won a gold medal at the National games in 2011.

And got the title of runner-up at 75 th Senior National Badminton Championships.

So these were some of the popular and top female Indian badminton players who made their country proud.

They are idols of many rising players who proved that women could play better than men.

And to become a player like them, remember that nothing is impossible with the right mindset and hard work.

And in case you face any problems or have any questions in your mind regarding this post, then feel free to ask us or pin them up in the comment section below.