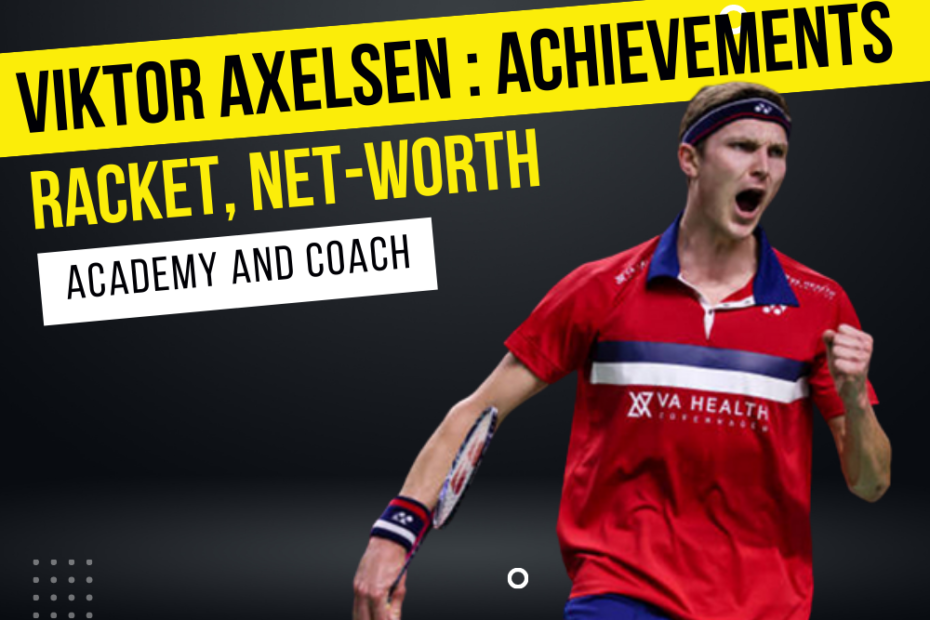 He is the 2017 World champion and 2020 Olympic champion, and he recently won the Malaysia Open titles in men’s singles 2022. Axelsen began his journey at age six after his parents were divorced, and at the age of 17, he joined the national team.

After which, he won the National Junior Event in singles and doubles in 2006 and 2008.

Later in 2009, he began his international journey.

And today, with his efforts and success, he has put Denmark on the map in the realm of badminton tournaments.

Achievements and victories of Viktor Axelsen

Rather than this, Viktor Axelsen won:

Also, take a look at this video, where Viktor Axelsen can be seen playing some of his best shots:

Viktor Axelsen is one of the forerunners in the new generation of men’s singles players to come after the era of Lin Dan and Lee Chong Wei.

Axelsen is a talented and skilled player. And holds an amazing height of 194 cm (6 feet 4 in).

His moves and jump smash are so steep that they are nearly impossible to defend by his opponents.

Rather than this, his good looks and charming personality have also attracted many young fans worldwide.

Viktor Axelsen is well known for his aggressive and offensive gameplay, which includes quick smashes, past pushes, and counterattacks.

And an even balanced racket like the Arcsaber 11 complimented this gameplay style.

So Viktor Axelsen, at the very beginning of his career, used Arcsaber 11 till 2006.

In 2017 Viktor Axelsen became the primary ambassador of the Doura Z Strike, and to test this racket, he used it in all tournaments and championships he played in 2017.

Viktor Axelsen used Arcsaber 11 for many years. Still, when Yonex launched Astrox 88S and 88D together in 2018, he opted for Astrox 88 S, as it was similar to Arcsaber 11 in many aspects and even balanced badminton rackets.

In 2019 Viktor Axelsen used Yonex Doura Z Strike, as he used this racket back in 2017, and now again, he switched from Doura Z Strike to a more powerful racket, Duora Z Strike.

It is a head-heavy racket with a rigid frame and comes in 4U and 3U variants.

Rather than this, it benefits both doubles and singles players who want a fast, accurate and powerful racket with a solid core racket shaft.

Also, it is one of the most powerful, precise, and fast rackets which Viktor Axelsen currently uses.

Viktor Axelsen is one of the most popular Danish players.

According to some research and analysis, the net worth of Viktor Axelsen has estimated approx $1 million- $5 million.

And his main source of income is his career as a badminton player, endorsements that he signs with some top brands like Yonex and Li-Ning, and the prize money he wins at the tournaments and championships.

Viktor Axelsen’s successful career has earned him a luxurious lifestyle, a beautiful house, and fancy cars.

Also, he is one of the world’s richest and most influential players.

Where did Viktor Axelsen take his training?

Axelsen was born in Odense, Denmark and was introduced to this sport at the age of six by his father as he lived with his father in Copenhagen after their parents divorced.

Viktor and his father used to play this sport at the Odense badminton club.

At 17, Viktor Axelsen joined Denmark’s national team, after which he made his debut in the senior international tournament at the 2009 Denmark Open, playing in the men’s doubles event with Steffen Rasmussen.

In 2012 Viktor moved to Valby, in Copenhagen, and started training at Brøndby elite centre, after which he won a bronze medal in the 2012 European Championships.

And when Axelsen played in Asia, he trained in Dubai for a quick recovery.

He has asthma and acute rhinitis. Instead, his father-in-law and his new coach, Henrik ‘PK’ Rohde, will train and lead him for the upcoming tournaments and championships in Dubai.